I am running for Mayor.*

It’s something I’ve been thinking about for a while but about which I’ve always been hesitant given a few obvious obstacles, not the least of which is my fondness for beer.

This past year or so though, the current mayor of Toronto has shown me that people with drinking habits far more serious than mine are capable of winning an election.

Indeed, he’s even shown that one can hold onto their seat in public office–and even register to run for re-election of that office–despite being photographed with now-dead criminals, admitting to smoking crack cocaine while serving as the mayor, drinking and driving, and making reference to “eating pussy” on live TV.

So I figure, what the hell. If this guy can do it, I can totally be mayor.

So I’m running for Mayor.*

The fact that I enjoy a few craft beers now and then shouldn’t be something that holds me back from running for mayor. Rather, I’ve decided to make my enthusiasm for the drink the backbone of my campaign. Indeed, I’ll be running as Toronto’s first “Beer Mayor” and the issues I’ll deal with will relate exclusively to Torontonians’ enjoyment of what I think we can all agree is the best beverage on earth.

I’ll put incredibly smart and talented people to work sorting out all that needs to be done to deal with the city’s transit, budget, services, and all that other shit, so don’t worry about that, but know that my first priority will be improving the city’s beer scene.

Below, I’ve outlined the details of my three-pronged platform. Help me spread the word and, who knows, perhaps come October I’ll ride a a delicious, hoppy, fermented wave of support right into city hall.

My first order of business, as the Beer Mayor of Toronto, will be to amend Chapter 608 of the Toronto Municipal Code, which deals with parks. Specifically, I would strike text from section 8, which deals with alcohol, as follows:

While in a park no person shall:

B. Provide, supply or in any way make liquor available to persons who on the basis of age
are not permitted to be supplied with liquor under the Ontario Liquor Licence Act; or
C. , serve or sell liquor unless in a designated area, authorized by permit and with
the approval of the Alcohol and Gaming Commission of Ontario.

In so doing I will make it legal under municipal law to consume alcohol in public parks. Toronto is home to a great many people who don’t have outdoor space and therefore treat the parks as their backyard. It is unfair to tell people they can’t enjoy an adult beverage in the sunshine in their “backyard.”

Provincial law already makes it illegal to be drunk in public, and that law should always stand. Specifically, the Liquor License Act, section 31(4)(a) states that “No person shall be in an intoxicated condition, in a place to which the general public is invited or permitted access.” Breaking this law is subject to a $65 fine. Accordingly, my changes would make it legal for people to have a beer in the park, provided they don’t act like drunken idiots.

Incidentally, a petition I created last year regarding this issue (then abandoned because I had a baby and it got cold), received broad public support.

Presumably, I would also need to find a way to make these plans comply with Sections31(2) and (3) of the Liquor License Act which currently make it illegal to have an open container in public. I would, however, hire a lawyer and make figuring out this piece of the puzzle that person’s only job. Ideally this person would work mostly from an actual park while drinking a beer as a show of solidarity. I imagine he or she would wear a blazer with sweatpants.

In most bars, if you could see where your beer is coming from, you’d probably order a pinot grigio. Beer fridges are all too often mouldy and dirty places and sometimes bar owners are even using compressed air from that very same disgusting fridge to push their beer through their draft lines. This is wrong for so many reasons. The mould and dirt are nasty, obviously, but also, exposing your beer to air makes for shitty beer. Air oxidizes beer, making it cloudy and flat tasting. Air has no place in your draft lines.

As Toronto’s first Beer Mayor, I will pass a bylaw outlawing compressed air in all city draft systems.

Furthermore, the lines that bring that beer from the keg to your glass are frequently disgustingly dirty. Dirty draft lines lead to beer that tastes mouldy, spoiled, and foul and likely looks cloudy and feels greasy in your mouth. This, clearly, is fucking gross. It can also actually make you sick (If you’ve ever had nasty “beer shits” the morning after a night of drinking, this is likely the cause). Beer is a food product. City health officials regularly inspect food safety compliance. Why not beer?

As Beer Mayor, I will make routine maintenance of draft lines by a professional service mandatory for licensed establishments in Toronto.

At the very least, I would pass a bylaw requiring that all establishments publicly post the date their draft lines were last serviced so that the public might decide if they want to drink a pint there. Better bars are already happy to share this info (I just emailed Jim McDonald co-owner of Bar Hop as well as Tomas Morana of barVolo and both were happy to let me know the details of their own frequent and thorough in-house cleaning schedules). As Beer Mayor, I’ll see that the bars like Bar Hop and Volo that are taking care of their beer get the appreciation they deserve and I’ll force the ones that are causing us to spend our hangovers sitting on the toilet to get their shit together (word play!).

As the Beer Mayor of Toronto, I want to support Toronto businesses; including those that produce alcohol. I just visited the City of Toronto website and did some digging and there is a nary a mention of the city’s breweries, brewpubs, and bars. This is a shame. There’s even a misleading tab entitled “TAP into Toronto!” that is actually about touring the city with a professional greeter–not at all the kind of tapping into Toronto I was hoping for.

As Beer Mayor of Toronto, I’ll see that the city’s beer-makers are touted alongside our great dining and tourist attractions. In addition to the information provided on city websites about museums, galleries, and trade centres, tourists will be able peruse the great bars and restaurants in the city, with an emphasis on those that support our local farms, wine, beer, and spirits.

Furthermore, in order to encourage small business owners to support local breweries and in order to combat the big, foreign-owned brewers’ dominance of the city’s draft lines, I would introduce incentives for bar and restaurant owners whose tap lines are more than 50% dedicated to locally owned brewers. I don’t actually know if  the breadth of the mayor’s powers even includes the ability to provide tax incentives to bar owners, but I would hire a really smart person to look into this for me. I assume this person would have a background in accounting and would own at least two neckties.

And that’s just the start!

Unlike a lot of other politicians, I’m willing to listen to public sentiment. As my Beer Mayor campaign grows, I’ll gladly incorporate the good ideas I hear into my platform. I am after all a beer man of the beer people.

What would you add to my Beer Mayor platform? Let me know in the comments below or share your ideas on twitter with the hashtag #BeerMayor and help spread the word. Even if I don’t win (which I clearly will), let’s see if we can make beer a topic of discussion this coming election–and not just in terms of how much of it the current mayor drinks on St. Patrick’s day.

#BeerMayor. Don’t make me put a fridge magnet on your car. 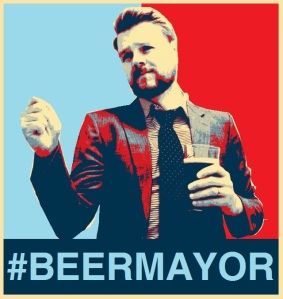 *I am not running for mayor.