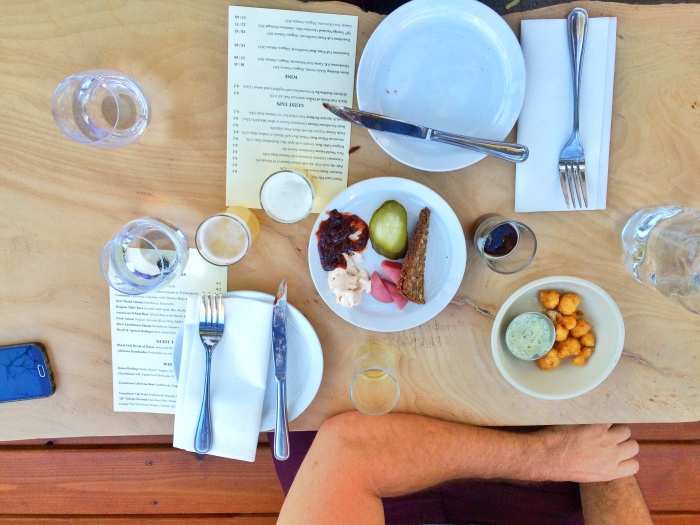 It isn’t all that often that, in my semi-professional adventures as a beer enthusiast, I can say I’m smitten, but after having visited Toronto’s Burdock–a bar, restaurant, and music hall that also happens to have a brewery onsite–I must admit to my smittenness. Er, I’ve been smote. They smited me?

What I’m trying to say is that I like the damn place.

Considering options of where to drink before this year’s Golden Tap Awards, my friend Leon (whose hairy arm appears above) suggested Burdock and, truth be told, even though I wrote an article detailing the release of their first beers, I had not yet actually been to Burdock, so I was eager to check it out.

Given that Leon and I are both dads, we arrived for dinner at Burdock at the early-bird-special hour of 4:45pm only to discover that the place wasn’t actually open yet. Thankfully, Burdock’s onsite bottle shop was and they were selling bottles of their Brett Farmhouse Saison and their Peach Apricot Sour Berliner. And so, as a means to kill the 15 minutes before we could sit down and order some beers, my dining companion and I walked back to his house and responsibly sampled these beverages like law abiding gentlemen. 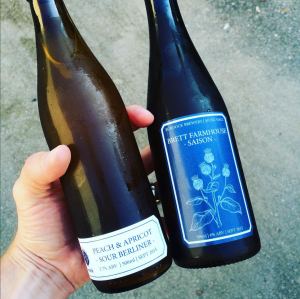 Both beers made lasting first impressions. The Peach Apricot Berliner was an excellent, tart and refreshing interpretation of the style and was balanced nicely given its rather thin feel and 3.7% ABV. It was exactly the type of beer you’d hope for if you’re ever sharing a bottle with a good friend on a hot day behind a reptile shop.

The commercial description for Burdock’s 6% Brett Farmhouse Saison is that it “smells like someone misdelivered a shipment of over-ripe pineapples into a sheep barn,” and while that may seem an unappetizing aroma, it’s a pretty accurate account of this great beer. It’s a wicked, cloudy, fruity, funky saison that is in exactly the wheelhouse of beer styles over which I’m currently obsessing. Needless to say, I was pretty excited to head back in once they opened and try the rest of the beers.

Once seated on Burdock’s patio, I was further surprised to see that this fairly-newly opened brewery featured a full 10 beers on tap that were made in house. Naturally, despite the need to depart shortly for the Golden Tap Awards, I felt it was my duty to sample all 10. And I’m fucking glad I did.

It is very often the case with breweries both new and old–even among breweries with much smaller lineups–that something just isn’t working. There’s almost always one beer that isn’t quite there or something that needs tweaking.  That’s why it’s remarkable that brewers Matt Park and Siobhan (who comes by way of Amsterdam and Mill Street) had created a full lineup of 10 beers that were all solid.

Here’s a breakdown of the other eight beers I tried, with some very brief notes, listed in order of their awesomeness. The first two, to my mind, were stupendous.

West Coast Pils – A 5.8% hoppy pilsner, this is basically just a pilsner with better aromatics and a touch of grassy hops. I could literally drink this every day.

Belgian Table Beer – A grisette made with spelt, rye, buckwheat, and oats, this 3.2% beer was a touch a fruity and nothing short of phenomenal.

American Wheat Beer – A hopped wheat beer, this thing was basically a 4.2% tribute to galaxy hops. And I mean that in a nice way.

Common – This 4.8% California common was a nice, simple and low ABV beer with some grassy, straw-hop aromas but seemed fairly similar in aroma and taste to Burdock’s Pale Ale for me, despite having been made with a different hop profile (Ontario-grown Pearl hops in this case).

Dark Saison – A 6% Belgian Ale made with Black Prinz Malt, this is raisins, chewy dark fruit, and brown sugar with just a touch of bitterness.

Pale Ale – Made with Nelson Sauvin and El Dorado hops, this 6% IPA wasn’t among the highlights of my trip to Burdock. It was perfectly fine, but not amazing.

And while we didn’t sample any of the main dishes, opting instead for snack-sized dishes for sharing, I can tell you the food was pretty good, too.

We had a rye bread and pickle plate, which was literally just pickled stuff and bread served with whipped goat’s cheese and a berry compote, and we also ordered popcorn cauliflower; deep fried, battered, pickled cauliflower florets served with an aioli.

Then, because I was still hungry after trying 10 beers, I also had a lettuce wrap of pork Chorizo, black bean purée,  salsa, and yoghurt.

I can’t really speak to the vibe or the clientele who frequent Burdock in the evenings, nor do I know what goes down at the music hall that I didn’t even set foot in (I was there at 5pm on a Wednesday), but if you’re into good beer (which I assume you are given that you’re reading this blog), Burdock is definitely worth checking out. The staff is knowledgeable, their duo of brewers are clearly worth keeping an eye on, and all the beer I tried is virtually without fault.

2 thoughts on “Toronto’s Burdock Brewery is the real deal”