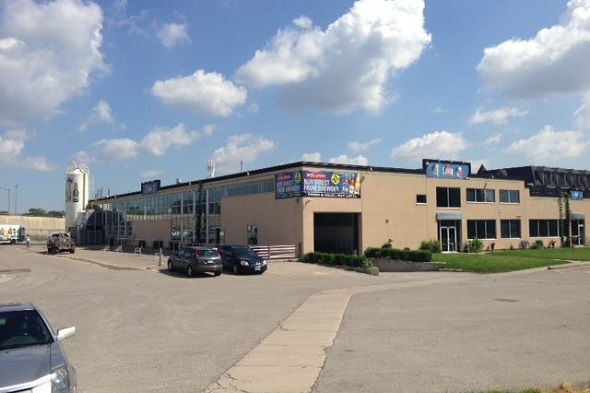 It’s that time of year when everyone begins to trot out their end-of-year reviews and we look back on the year that was in beer.

And as we beer writers all surf through our own stories from the previous year in an effort to slap together an SEO-friendly list of happenings we’ve already written about, I feel like there is one item of significance that will get overlooked in a lot of people’s round-ups. It’s the fact that Cool Brewery in Etobicoke is currently wrapping up renovations that will see their space increased by 20%–renovations that have added  four new 330-hectolitre fermentation tanks, vastly increasing their production capabilities.

As they themselves noted in a recent edition of their newsletter, COOL NATION NEWS! each of these tanks will hold the equivalent of 96,800 bottles of beer.

As you probably know, it’s unlikely that those bottles will all be filled with Cool Brewing’s own brands of beer, Cool Lager, Buzz Hemp Beer, and Stonewall Light. Instead, it’s far more likely that the space will be dedicated to Cool’s other, increasingly lucrative business; namely, renting out their space to contract brewers.

Cool currently rents their facilities to a number of other brewing companies, including Denison’s, Spearhead, Duggan’s, Hogtown, and the Ontario Beer Company. With their recent expansion, it seems likely that that list will grow and as such, it seems that the always-simmering-below-the-surface debate over the merits of contract brewing is poised to boil over in a violent way very soon.

I know that sounds a bit over the top, but consider two things: 1. I’ve been drinking and 2. At a time when the craft beer craze in Ontario is booming (beer-news aggregate site Mom n’ Hops claims there are 150 registered breweries in Ontario), Cool’s expansion will potentially make it possible for a lot of new faces to get into the beer-making game. It seems highly likely then that Cool will be marketing this newly-increased capacity to other prospective contract brewers and it is therefore reasonable to expect that the news will translates to some new beer brands in Ontario soon.

So it’s probably worth figuring out if more contract brewing is a good thing or a bad thing.

Well, it depends who you ask.

People who actually own their own bricks-and-mortar breweries would claim that contract brewers are something like the scourge of the brewing industry. These folks maintain that contract brewers, i.e. those who use other people’s facilities to make beer, shouldn’t be considered “real” brewers as as they have no real skin in the game.

This is the argument people use when they turn their noses up at companies like Hogtown Brewing Company or Triple Bogey Brewing Company. Hogtown, for example, is literally made up of a bunch of guys who decided to start a brewing company and all pitched in some money to hire the guy who invented Bud Light Lime to create a beer for them using Cool’s facilities. Triple Bogey Brewing Company was started by a guy whose previous experience was in golf apparel who wanted to start a new golf-focused company that also included beer, so he employed the services of Great Lakes Brewery to help him brew an easy to drink lager that met his needs.

These two companies, if you ask the bricks-and-mortar breweries, are doing vastly different work than the “real” brewers, and to hear them all lumped together as craft brewers is enough to make some brewmasters and brewery owners (and likely a certain brewpub owner in the Junction) have a fucking aneurysm.

On the flip side of the contract brewing coin are companies like Left Field Brewery. Mark Murphy, the brewer behind LFB, is clearly a beer-focused guy. One needn’t spend much time chatting about beer with Mark to realize he is a brewer and he is passionate, interested, and knowledgeable about the creation of beer. The company Mark runs with his wife Mandie currently brews their beer out of another brewery I can’t recall at the moment..(this Amsterdam Double Tempest I’m drinking might be to blame) but they plan to open their own actual brewery when they can. To hear the argument for contract brewing from their side is to realize that brewing is bloody expensive work to start. It’s all well and good to demand that someone own a brewery before they dare call themselves a brewer, but the reality is that real estate prices in and around Toronto (to say nothing of the cost of brewing equipment) are too prohibitive to just starting your own brewery overnight. Contract brewing provides a viable means to build capital with an end goal to having one’s own brewery–Kensington Brewing Company has recently announced plans to do just that.

So where does that leave us? Are contract brewers somehow “less than” because they don’t own a mash tun? Well for me, it leaves us where all consideration of beer should begin and end: the taste.

That is to say, while I generally side with small, independent breweries and I’d like to know that everyone behind the creation of the beer I’m drinking is passionate about the creation of that beer, ultimately all that really matters is what the beer tastes like. No, seriously. I know I’m among the worst offenders in the Toronto beer scene for what others call “craft beer evangelism” but the reality is that I drink beer that tastes good. Thankfully it just so happens that the companies that have passionate people making their beer are generally the ones that make the best-tasting beer.

Furthermore, while the big bland beer makers at Molson and Labatt have crazy amounts of money to market the shit out of their beer to a point where it doesn’t really matter what the beer tastes like, the contract guys simply don’t have the money to do that. Which means that for them, even more so than brewers with more dough, the taste of their beer really is all that matters. So while some may fear contract brewers flooding the market with shitty beer that’s little more than an exercise in marketing, the reality is that ultimately the market will decide what is worth having around and what isn’t .

So, while we will almost definitely see some new contract brewers on the scene in the years ahead given Cool’s expansion, far from being something to fear, it seems to me that it’s actually something that will be good for craft beer in Ontario. I can see the argument that some have that the folks who run companies like Hogtown and Triple Bogey aren’t brewers–but frankly that’s not news, even to them. None of the people involved in these companies would claim they are brewers. But if people who are passionate about beer opt to get into the beer-making game somehow, and they find resources to help make good beer, power to them. It’ll be more quality craft beer for us.

And if they’re not making beer that tastes great, the increased competition that will result from more craft brewers will probably mean they either have to up their beer-making game, or get out. Either way, good beer prevails!

Photos of Cool Brewery’s expansion in progress taken from their facebook page.