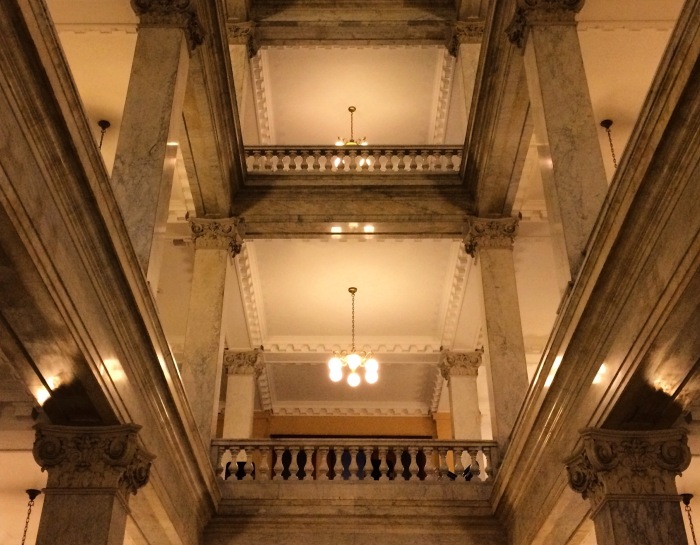 “Though this be madness,
yet there is method in’t”

It’s an event hosted by the Speaker of The House wherein the OCB, a 50+ member group that is currently the only organization advocating on behalf of the province’s small brewers, is welcomed into the Ontario Legislative Building to pour their beers for myriad MPPs and (mostly) their thirsty, bespectacled, pointy-shoed staffers.

I have attended in previous years and wrote about last year’s event in less than flattering terms as a missed opportunity in my opinion given a climate in Ontario that seemed destined for real change to the beer scene.

This year, even more than last, the event seemed rife with potential for some grand statement: the premier of Ontario has made a few opening but vague salvos relating to reforming the province’s beer scene and speculation grows about what might be in the upcoming budget for people who buy and make craft beer–including rumours recently reported by The Toronto Star’s Martin Regg Cohn that we can expect beer in grocery stores soon.

This year, I thought, someone might say something bold that electrifies the crowd.

And I was right.

Much like last year, this event seemed less like the explosive clash of craft brewers and politicians that occurs in my sad, sad, beer nerd dreams every night and more like another annual excuse for Queen’s Park staffers to pop down for some free beer and a loose meat sandwich (which was delicious, by the way).

But then Darren Smith, the owner of Lake of Bays Brewery and the Vice Chair of the Ontario Craft Brewers took the mic and said some truly interesting things, which I’ve transcribed (with commentary) below.

After being introduced by the current Speaker of The House, Dave Levac, who gave the requisite shout out to the event’s founder, former Speaker Steve Peters, Smith gave some obligatory thank yous to event organizers then offered up:

“We owe a special thank you to the Premier for her determination on the alcohol policy file right now. The issue of beverage alcohol in this province has been one that’s difficult to confront and it’s one that’s been in need of changes for sometime, so we are appreciative to the Premier for all she’s doing on that.

At this point Smith offered up a smattering of industry facts to tout the OCB’s achievements, including the fact that craft brewers now account for 30% of brewing jobs in the province, and the crowd grew slowly louder–but then:

At the OCB, we’ve really seen for a long time as our biggest issue access to retail.

Painfully, this, the exact moment Smith brought up the issue I hoped he might address, the room got far too loud for him to continue and they literally closed off half of the space being used so that those who wanted to listen could actually hear the man. Seriously. The very minute the OCB tried to raise a sticky political issue at the Legislature, fate stepped in and more than half of the attendees at this event were shut out on the other half of the room and they didn’t hear the remainder of Smith’s speech. Sigh.

We’ve got brewers that are looking for a place to sell their beer, we’ve got consumers looking to buy them and obviously the place we meet is the retail. So how do we shape the retail environment, that meeting point between brewers and consumers in the best way possible?

Our feeling is really that if we can get the retail environment right in this province–and that’s obviously the subject of a lot of the debate and a lot of the reforms that are being considered right now–we could easily double or triple the market share of craft beer in Ontario, bringing it from about 4% where it is now to 8%, 12% or even more, which is consistent with what we see in other jurisdictions like Alberta in BC.

In terms of the options that are available right now, we’ve got the LCBO, which by and large has been a great channel for the OCB and it’s shown great support to the Ontario Craft Brewers over the years. We have great partners in them.

The Beer Store could be a great place to sell beer but obviously there are some substantive reforms that are required there before that happens.

But as craft brewers, we really do feel that in the midst of all this, we do still need a channel, we do still need a market for our products that’s designed in the spirit of the way the craft beer industry works and that really is the spirit of cooperative entrepreneurship where we are working together to grow craft and grow awareness of craft beer.

This is really the defining characteristic of craft beer no matter where you go–whether in Ontario, or elsewhere in Canada, in North America or over in Europe–anywhere else you go around the world. We really feel that the best way to achieve this is to also allow brewers–in addition to selling at the LCBO and The Beer Store and potentially in grocery stores–to also allow us to open our own stores offsite, and to cross sell each other’s products, so as to cooperatively sell each other’s products in our own brewery retail stores, and to be able to open more stores as we believe the liquor control act allows [If this great ideas sounds familiar, it’s likely because it’s virtually exactly what I proposed as a way to fix Ontario’s beer scene back in January, FYI. Yes, everyone reads my blog — BJ].

So anyways, I won’t bore you with all that [Darren really said this. He dropped what was literally the most interesting thing anyone has ever said at the OCB Queen’s Park tasting then immediately apologized for boring everyone. –BJ] But to sum up, there are big changes afoot and if we do it right, and we base it on the principles of fair play and equitable access to the market, we can kind of have our cake and eat it too. We can improve access to consumers, which is what we should all ultimately be aiming for, and we can allow the industry to reach its full potential, which can create a number of jobs in this province.

So I’ll end with a request to please support your local brewer. There are lots of great brewers in this room. There are even more great brewers across this province. So go out, buy a six pack, a can, or a bottle from a brewer you like, tour a brewery, whatever tickles your fancy.  But support your local brewery because there’s so much good beer out there. I’d like to close with a toast to the Speaker and the members here. Thanks very much for having us and thanks for your support.

As you can imagine, at the close of this speech, the room erupted in cheers and the members of the OCB carried Darren off on their shoulders while the province’s media raced to a bank of pay phones to get the scoop wired back to their respective home offices.

The sad truth is, most people continued their conversations and sipped plastic cups, and Darren walked away from the podium on his own accord, while I exchanged a raised eyebrow with the other beer writers scattered about the room and we shared a collective, “Eh?”

The Speaker’s tasting seems like a great place for Darren Smith to drop such a juicy nugget of news, given the hypothetical cross-section of pols and beer folks, but as I noted last year, the political staffers in attendance don’t typically seem all that interested in the actual politics of beer. Not too surprising, but disappointing nonetheless.

Regardless of the lacklustre response to the news, it still seems like news to me. So is it true? Are the OCB actually asking for brewers to get their own stores? Or is it just bullshit? A sort of chest thumping to a room that wasn’t even really listening?

I spoke with OCB president John Hay at the event and he confirmed that a statement would be hitting media folks’ inbox today reiterating what Darren had said: The OCB is officially working toward allowing craft brewers to have their own stores and they want brewers to have the to ability to cross sell each other’s products (he also mentioned the rather awesome news that they’d also like to push for the ability to sell craft spirits and craft ciders).

So what does this mean? Well as of right now, it means nothing. It means the OCB has waited patiently as news and speculation continues to come out about what changes might be coming to Ontario’s beer scene and, hearing nothing they actually like all that much, have finally decided to offer up their own suggestions.

Again, this doesn’t mean this is actually going to happen, but to me, it’s a really promising development for a couple reasons. First, the OCB is taking a bold and clear stance. Typically quiet throughout the ongoing retail beer kerfuffle, the OCB has really only spoken out publicly a couple times: once to issue a roundabout rejoinder to the Beer Store’s ridiculous offer for ownership stakes, and once to say that they weren’t all that interested in a solution that put control of retail beer in the hands of yet another big third party. This then, a clear statement of another alternative, is really the OCB’s first declaration of what they actually want, as opposed to simply saying what they don’t want. It may not seem like much, but as someone following this saga closely, it feels a bit like Hamlet has finally got off his arse and decided to kill Claudius, i.e. it’s nice to finally know, more than halfway into this drama, what the OCB actually trying to achieve.

Of course, saying you want something and actually getting it are two different things. Hell, even after he decided to do the deed it took that famous Danish procrastinator two more bloody acts before he finally got around to offing the guy shagging his mom–and Hamlet didn’t have to rely on Ontario’s molasses-slow provincial government to help him do the deed.

But, to me the fact that the OCB has made this announcement publicly and will follow it up with a press release later today means this is more than just wishful thinking.  It would not be their style to piss off the province by making bold, chest-thumping statements in the Legislative building, so while we’re all late to the party, to me a public declaration that they want brewers to have their own stores indicates that they’ve already vetted this option through their contacts in government and they know this is actually a possibility.

We’ve still got a few acts before we see what’s actually in the budget for craft beer fans, but last night’s announcement to me indicated we might yet see a happy ending. Just like…Hamlet?

Update: At about 2:15pm today, the OCB issued their official news release on this subject. You can read it in its entirety here.

11 thoughts on “The Ontario Craft Brewers would like their own stores, please”