This is a true story. 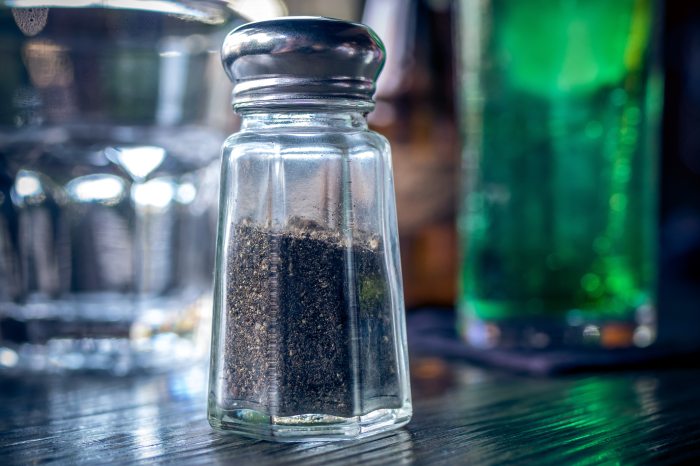 I used to work in bars and restaurants when I was in university.

My longest tenure at any one place was at a divey bar attached to a Howard Johnson near the 401 here in London. It was called The Black Pint and, at one point, it had been someone’s attempt at a quaint Irish Pub. By the time I arrived, however, The Black Pint’s best days were behind it, though it still did a pretty lively business on weekends, patronized by an eclectic mix of musicians, bikers, and whomever was staying in the adjacent HoJo—then the lowest cost accommodations in that part of town (now torn down to make way for The Keg). Fights were not uncommon at The Black Pint. A jealous member of a famous motorcycle club had once put three of our regular customers in the hospital. It was not without a certain charm.

In an ill-advised attempt to save the business at a time when it seemed like most of our customers were only there to fight each other and most of the employees were only there to steal and/or get fucked up on the job, the business was sold to new owners who, for some reason, thought it might make a good spot for a family restaurant. Accordingly, they re-branded the place “The Wobbly Penguin” and started serving brunch. It was every bit as bleak as you might imagine and most of our customers and staff fled the place like rats on a sinking ship, but for some reason I stuck around.

When I had started working there, it was on a night when there was a need for an extra set of hands in the kitchen. There was usually just one cook, but those early, busier weekends required someone else on the fryer and in the dish pit, which was essentially a soggy corner of the walk-in-closet-sized kitchen. Over the course of time, as other employees left via resignation, termination, or incarceration, I graduated from sous-chef-dishwasher to cook to server to bartender. Eventually, as the business dwindled painfully into the Wobbly Penguin era, there were nights I’d be asked to do all these jobs at once.

One such night I was the sole employee except for the General Manager, Ned.

Ned was born in Serbia and had served in the military and while we were close in age, he was older than me in many ways. Ned had already seen friends of his die at an age when I was mostly concerned with reaching second base. One did not fuck with Ned.

In title, Ned was the General Manager of the Wobbly Penguin — though I wasn’t sure what experience he had to have earned that role and his day to day function seemed mostly just keeping the place from burning down and consuming enough beer so that I felt like my own at-work consumption was reasonable by comparison.

On this particular evening, the bar was empty as Ned was absent-mindedly playing MegaTouch while waiting for the earliest possible time we might close up the bar. Ned and I had a habit most nights of locking the doors when the last customer left and killing the lights so we could get serious about our beer drinking, smoke the American cigarettes he always seemed to have, and play the Golden Tee golf game in the corner of the bar until the wee hours.

As I polished glasses and Ned flicked at his game of TriPeaks, a customer came in through the lobby of the HoJo and marched confidently to the bar stool right in front of me.

“I want Russian shot,” he said with a thick Russian accent.

In the course of having worked at the Black Pint/Wobbly Penguin, I had heard weirder orders. I once had a guy walk into my crowded bar alone, march up to the bar, and order a shot of tequila with lemon. He then snorted salt off the back of his own hand, drank the shot, squeezed the lemon wedge into his eye, and then left the bar. No one saw this happen except me.

Chasing a vodka shot with some pepper was different, but not that weird, all things considered.

I poured the Russian gentleman a shot of vodka and set the pepper shaker next to it. “There you go,” I said.

“What is this?” he said, offended. “In Russia, we do real shot.” He gestured toward the row of pint glasses near the draft tower.

“I can’t sell you a pint of vodka,” I told him. “By law, the most I am allowed to sell one person at a time is three shots.”

I don’t know where this information came from. In all of my years serving alcohol, I never once bothered to get my Smart Serve certification. I didn’t know if I could sell the guy three shots at a time or not. I still don’t know if this is legal.

He thought about this for a second. “OK,” he said. “Give me two more shots of vodka.”

“Now, could I please have empty beer glass?” he said.

This is when I realized he was clever.

Ned either wasn’t paying attention or didn’t give a shit what was going on. I gave the Russian an empty pint glass and, predictably, he poured all three shots of vodka into it.

“Could I please order three more shots vodka?” he asked me. It was clear his plan had been put into action.

I looked at Ned and while he didn’t look up from his game, he made a gesture with his hand that I instinctively understood to mean, “Fuck it. Let’s see where this goes. I’m bored.”

With managerial consent, I poured three more shots—and secured the Russian’s credit card, just in case his plan was to slam these and bail on his tab. Once again, predictably, he drained the three shots into his pint glass.

“OK,” he said. “Could I please order three more shots of vodka?”

This is where things got more serious.

Ned was no longer playing Mega Touch and, instead, had moved to the seat beside the Russian. Our eyes met and we knew that, yes, we were of course going to watch this man drink nine shots of vodka at once. We had come this far, after all.

Because the bar was empty, it was already quiet, but I swear things got a touch quieter as I poured a seventh, eighth, and ninth shot of vodka for our only patron. As expected, the contents were promptly poured into the pint glass. You’ll recall that I was, of course, not technically over-serving this man thanks to the Smart Serve rules I had very confidently made up a few minutes earlier. This was out of my hands, legally.

At this point, the Russian reached for the pepper shaker and I waited for him to sprinkle some of the seasoning into his drink. Instead, he opted to twist off the lid of the shaker and upend it over the pint glass. Ned and I exchanged a look that meant, “Fucking yes.”

As our new Russian friend tapped out the contents of the paper shaker, a full inch of pepper settled at the bottom of his pint glass. It flitted down softly through the glass like some eastern European masochist’s version of a snow globe.

The Russian could sense that the occasion called for someone to say something meaningful. He opted for, “This is how we do shot in Russia!” before he took down the entire contents, vodka and pepper, in one admirable, disgusting, awe-inducing gulp.

The following seconds felt like a lifetime. Ned and I waited in palpable silence, staring at the Russian to see the effects of the drink take hold. In reality, I’m sure the reaction was immediate, but it felt like forever. He tried to maintain a brave face, but the veneer soon cracked and in no time at all he looked like he’d welcome a quick, merciful death.

He became a man painfully at odds with his pride and enough pepper in his stomach to have caused a small horse serious discomfort. He would not admit defeat, and yet clearly he was defeated.

I had to give him credit. He was a man determined to project an air of nonchalance, despite all evidence to the contrary. I had never before seen someone boasting about the utter lack of effect consuming two ounces of pepper had had on them while simultaneously clearly suffering violently from the effects of consuming two ounces of black pepper. I don’t imagine it’s something I’ll ever see again.

“Jesus! Do you want some water?” I asked.

“Water?!” he asked, incredulous. “This is *HACK* how we always *GAG* do shot in *DRY HEAVE* Russia! Set me up with *DEATH RATTLING WHEEZE* another!” he said.

Try to imagine someone trying to outwardly project their imperviousness to pain while also experiencing something profoundly unpleasant. He was equal parts chest-thumping, Russian machismo and retching, hacking spastic. It was surreal, something rare and spectacular to behold. He was going through so very much at once—and he wasn’t even drunk.

Until of course, he was.

Once the effects of half a shaker of pepper in his stomach began to subside, the hardy glass of rot-gut bar well vodka took hold — and it took hold quickly. The brave-faced stranger who had marched into my bar was no more. He was quickly reduced to a quivering blob. Owing perhaps to the pepper but also the loss of control, I recall significant snot.

When we refused his request for a second “Russian shot” there were impotent threats of violence, a haphazardly thrown slap, which Ned merely dodged with detached amusement. We rode an emotional roller coaster of anger, remorse, and reconciliation. He came quickly to regret everything and in the very brief interlude following the worst drink I have ever poured, Ned, that Russian, and I were thrust into the roles of strangers, enemies, and then, predictably, best friends.

He became a fawning, blubbering mess. He confessed his sins. Professed his affections. We learned of his life, his hopes, his dreams. He was an open book and he wanted us to be a part of it. I think there was vague talk of us purchasing a boat together. 25 minutes had passed since he had entered the bar.

But of course, the only thing worse than an obtusely drunk man threatening you with physical violence is the same man obnoxiously professing to be your best friend. Ned and I knew our brief time with our new friend had come to a close. And so, without much effort we hoisted a jello-y, drunken limb over Ned’s shoulders and escorted him back to the Howard Johnson. The perpetually-stoned front desk clerk, who had seen all manner of scum and villainy cross the threshold of his lobby, was unfazed and dutifully walked the man down the hall to his room, patiently guiding him as he careened like a pinball off the thin walls of sleeping guests.

Ned and I returned to The Black Pint, locked the doors behind us and consumed Malboros and Stella Artois over Golden Tee until the sun started to rise. In the morning, our Russian friend, well-rested and revitalized, slunk in during brunch to retrieve his credit card and never returned.