For roughly five years, covering the province’s craft beer scene from my condo in Toronto’s downtown, I was often called upon to write lists of the best new local beers, the best places making beers, and the best places to consume those beers.

Last year, I left the cozy confines of my shoebox-sized condo in the big city in favour of a house in London, Ontario with ample room to chase a toddler around. As such, I have less places nearby to go enjoy a beer and, truth be told, less inclination to even leave my property to do so. And so, because they say you ought to write what you know, I thought I’d offer up an insider’s guide to the places I tend to do most of my drinking these days. Here are the top five places to drink beer in my house.

While the late afternoon sun can be fairly sweltering given the back deck’s westerly exposure, a large 100 year-old spruce pine provides ample shade for early evening beer drinking and a newly acquired patio set means you can kick up your feet and enjoy a drink in comfort. A popular spot for locals for post-lawn-mowing refreshment, a sessionable but still-interesting pale ale is an ideal accompaniment to back deck imbibing. Great Lakes Brewery’s Canuck is often served here. Seating is limited though and the experience is occasionally marred by the arrival of an inquisitive skunk or raccoon. 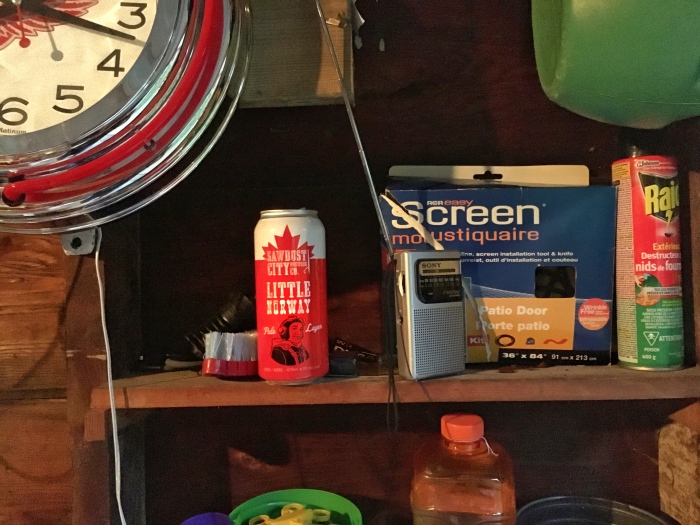 As one of very few places a local parent might justifiably hide behind a locked door, the bathroom is an excellent, well-lit place for refuge and thus, not a bad place for a beer. The squeamish might take offense at the idea of enjoying a glass of well-made beer while–ahem–seated, but the nearby glassed-in shower, with a powerful stereo speaker nearby, provides an inarguably excellent place to enjoy a cold beer paired with a hot shower. A crisp, refreshing Czech-style pilsner like Steam Whistle is an excellent pairing to the hot detoxifying steam of a shower. The location even features a handy recessed shelf, presumably designed specifically to house tall boys and the occasional pint glass (some of the locals have also found use for the beer shelf as a shampoo holder).

Given that this is the sleeping area of a married couple, evenings of “Netflix and chill” in this bed are not at all a euphemism. Accordingly, when it’s time to get into this popular but comfortable spot to marathon The Mindy Project until one passes out, it’s certain that you’ll have at least one free hand with which to hold a beer. Given the locale affords the opportunity to almost literally pass out while drinking, this is a popular spot for high ABV double IPAs like Bellwoods Brewery’s Witchshark. Also, while it might draw dirty looks from the management, this spot technically allows you to bring in your own food. Lay’s Dill Pickle Chips are a popular choice among those who frequent the bed.

An excellent place to find quiet satisfication in getting some small, menial jobs accomplished, the garage is an increasingly popular place to have a beer for those seeking an excuse to be both alone and outdoors while still feeling useful. The exposed beams and concrete floor provide a rustic ambiance and patrons are welcomed to take part in activities like assembling even more storage solutions and breaking down the location’s seemingly endless amount of cardboard with a pocket knife. Given that this is one of few local venues that is tolerant of cigar smoke, a rich and roasted or malt-forward beer that pairs well with an inexpensive stogey is a great choice. Cameron’s Ambear Red Ale is occasionally on offer and Neaustadt’s 10W30 usually makes an appearance during the autumn months.

Drinking actually comprises most of the activity conducted at this small but popular location. With its  live-edge wood and minimalist design, the spot–theoretically–offers up few distractions to freelance writers facing down a deadline or even aspiring novelists taking a biannual pass at a laboured excuse for fiction. Inevitably the space lends itself far more readily to perusing social media, engaging in moronic and meaningless debates with trolls and wasting immeasurable time before finally closing up your lap top and muttering, “fuck this” as you depart in search of another beer. In keeping with this location’s vibe, the drink of choice here is usually something bitter.