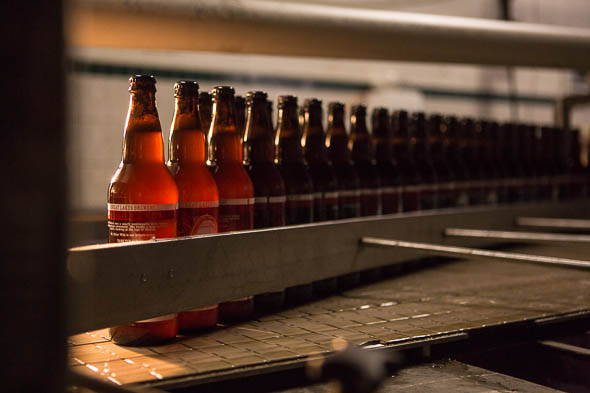 Well, it ain’t Karma Citra, but it will certainly do the trick.

Fans of brewer Mike Lackey’s great IPAs will be pleased to learn that Great Lakes Brewery’s IPA “My Bitter Wife” is slated for an LCBO release.

The release is part of the brewery’s Tank Ten series, which is apparently a “a tickle trunk of tasty treats,” and is designed to let GLB’s brewers flex a little of their creative muscle, reserving the eponymous fermenting tank number ten at their brewery to let them “brew whatever they heck they want.”

I was lucky enough to be at the brewery on Friday while the 650mL bottles were rolling off the line in anticipation of the LCBO release next week so I was granted this “scoop” as it were (Incidentally, the purpose of my visit was a collaboration brew with Mr. Lackey to brew what I hope will be another of his fantastic IPAs…but more information on that soon).

If you’ve been lucky enough to try Karma Citra or Johnny Simcoe or any of his other hop bombs, you’ll know that Mike Lackey makes some damn fine IPAs and My Bitter Wife is certainly no exception. It’s 7%  ABV with amazing monster hop aromas that IPA fans will love and at 90 puckering IBUs it has a perfect bitter taste imparted by a mostly Simcoe hops profile that’s balanced with a little Citra, Columbus, and Cascade. All of those fantastic hops are balanced with a subtle graham cracker malt finish so that the bitterness doesn’t linger. There’s head and lacing for days and in short, if you’re a fan of American IPAs you need to rent a truck and get your ass to the LCBO as soon as these bad boys hit the shelves (They’ll retail for a totally reasonable $5.95, incidentally).

The beer is named as a tongue in cheek tribute to Carrie Nation, a force behind the temperance movement who fought to suppress the dreadful curse of liquor and, thankfully for us, lost. You can hoist a bottle of My Bitter Wife in her honour in advance of the LCBO release at a launch party to be held tomorrow, Thursday April 18th at the brewery in Etobicoke from 4pm-8pm.

Also stay tuned for more Tank Ten beers to be released throughout the year at the brewery and the LCBO.