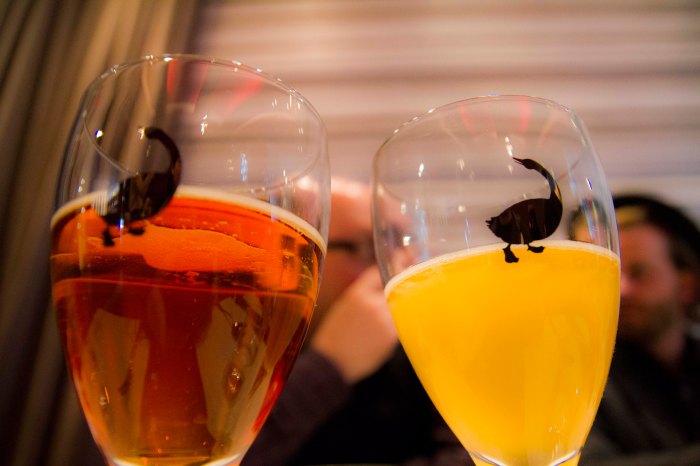 If you’re a small, renowned craft brewery, the idea of being bought out by one of the big brewers is a  somewhat dubious prospect. On the one hand, it means you’ll report to a big corporation who might be a little more concerned with their bottom line than your company’s product. On the other hand, it means you’ll now have a wealth of resources at your disposal, allowing you to expand your beer into markets you may have never thought possible, sharing your beer with a new audience.

It’s a precarious balance, but it’s one that Chicago brewer, Goose Island, seems to be managing successfully as they look to expand distribution into Canada later this month.

Started as a brewpub which grew to include a full distribution brewery and, later, a second brew pub, Goose Island was purchased by Anheuser-Bush InBev in 2011 and, thanks in large part to AB InBev’s resources, will arrive on LCBO shelves this spring.

The two beers they’ll be bringing are from their “Vintage Ales” line–a name which has less to do with the year of their creation and perhaps more to do with their intended upscale market. The beers will launch at the LCBO in wine-style 765ml bottles for $9.95 each and, until then, will be available exclusively at Toronto’s Nota Bene restaurant. Both beers are Belgian-style ales and, incidentally, both are named after ladies.

“Sofie” is named after the brewery founder’s granddaughter and is an excellent cloudy saison with all kinds of foamy head and fantastic citrusy-mango aromas. It’s got a tart, nearly sour flavour and further drinking reveals underlying and subtle notes of vanilla and orange peel. The folks at Goose Island use the word champagne in their literature as a point of comparison for this beer and it seems an apt one given the beer’s light but still sophisticated flavour profile. It’s quite easy to drink at 6.7% ABV and it could certainly hold its own if it were paired with upscale fare–like that offered at Nota Bene, perhaps. My friend and the photographer for this post, Paul Aihoshi, who always has interesting things to say about beer, noted that Sofie “smells like oranges and flowers. One time I went to camp in Muskoka. This reminds me of breakfast there. Mango Tropicanna.”

So it’s got that going for it.

Their second beer, “Matilda,” is a coppery amber Belgian ale and gets its name from Matilda of Tuscany, a storied Italian Nobelwoman whose legend also inspired the name of the famous trappist-brewing monastery, Notre Dame d’Orval.. Matilda had less head than Sofie and was marked by notably funky aromas. The funkiness is present in the taste too but it’s marked mainly by fruity flavours and heavy, biscuity malts with a little bit of a bitter finish. On Matilda, Paul noted “This reminds me of my cottage in the morning when you walk down to the beach and step on a rock with spongy moss,” which is, surprisingly, quite fitting I think.

Both beers will be officially available at the LCBO as of April 29th, but some twitter chatter among beer folks reveals that it’s shown up in the Summerhill LCBO and a few others so if you look carefully you might find it out there already.

As for any changes in the brewery’s product or philosophy as a result of being owned by one of the “big guys,” Goose Island staff reports that coming under the control of Anheuser-Busch InBev hasn’t changed much about the way they do business. Granted AB InBev has bought some new fermenters and there’s considerably more attention paid to workplace safety now that they’re a much bigger target for potential lawsuits, but aside from the clearly-not-all-that-popular addition of drug testing, the company’s brewers appear to have been left to do what it is they’re good at; namely making good beer.

So, while it might be a result of shrewd capitalism that’s brought them here, Torontonians can be thankful for the opportunity to try some really well made beer we may not normally have had a chance to get our hands on. And you certainly can bet that if Matilda and Sofie sell well here, we’ll be seeing more from Goose Island.

Addendum: I write this only because he insisted that I do. Despite informing staff at Nota Bene that he was lactose intolerant, Paul Aihoshi, intrepid photographer and savant beer reviewer, was stricken with violent diarrhea following the lunch event held to launch these beers .