Because we live in a shallow, celebrity-obsessed, drain-circling, increasingly culture-deprived world wherein the things that handsome, famous white guys do on vacation are deemed newsworthy, I am aware of the headline-worthy fact that a few days ago Matthew McConaughey found himself vacation near Brad Pitt and, as a means of saying hello, Mr. Pitt threw Mr. McConaughey a beer.

(To be clear: I’m aware of this “event” because of Google Alerts related to beer and totally not because I troll TMZ for totes hot Khloe and Kim gossip, obvi. lol omg lmfao.)

The “articles” on the “event” seemed to point to the reason each handsome white man found themselves in New Orleans and the various projects that each were currently working on, but few, I discovered, mentioned the only thing I wanted to know about the story once I was aware of it: What kind of beer did these handsome gents exchange?

Well I did some digging because I need more hobbies and have ascertained that the beer in question was likely Hopitoulas IPA from NOLA Brewing.

Hopitoulas was the third addition to our year-round beer portfolio. This 6.5%ABV ale is a West Coast style India Pale Ale that combines six malts and six hops with additional dry hopping for three weeks. It takes about a month and a half to make each batch and we think it is worth the wait. Hints of pine and citrus with a powerful, yet balanced hoppy flavor, Hopitoulas packs a punch that you won’t forget. Available on draft and in 16 ounce cans. 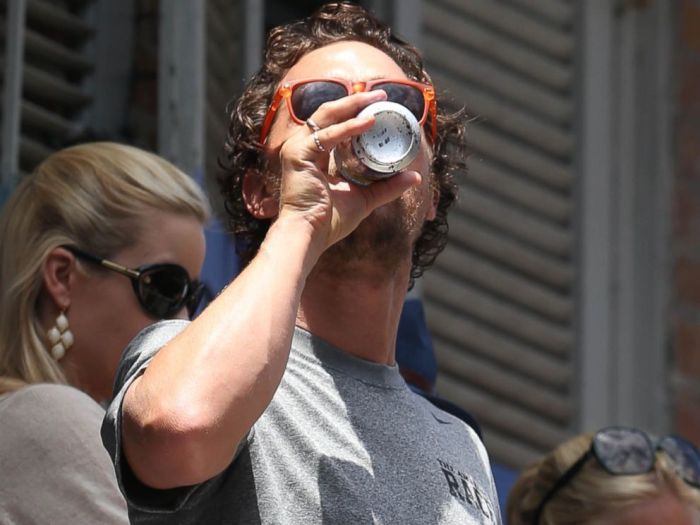 I wasn’t too sure before, but I guess Brad Pitt is cool.

I mean I guess I’d accept a beer from him if he threw it to me.

Bonus: Nola Brewing emphasizes sustainable business practices like using marine-friendly can holders and locally grown ingredients and even donates to The Gulf Restoration Network’s ongoing effort to protect and restore the Gulf of Mexico. So yeah, even Brad Pitt’s beer of choice is socially conscious. What a dreamboat. Sigh.