In case the title of this post and the image above didn’t make it abundantly clear: Nickel Brook’s Naughty Neighbour is now available in cans.

Personally, I’m excited about this for a few reasons.

First and foremost, I’m a big fan of the current trend toward sessionable pale ales. There has been an argument made as of late that “sessionable” is basically just a nice way to say the beer facilitates binge drinking. Frankly, I’m OK with that. Yes, I am a nerdy beer-sniffing snob and am capable of approaching beer with a discerning, critical eye, nose, and mouth, but there are also times I feel like drinking three, four, five, even six of the same beers in one sitting. And Naughty Neighbour is actually chief among my beer choices when I opt to do so. The 4.9% American Pale Ale is aromatic, with all the grapefruity, citrusy, bitter goodness I love in a pale ale but at wholly reasonable 4.9% (and I know it seems like I’ve been giving a lot of love to Nickel Brook lately, but let’s face it, they’re making some good beer).

Second, I like beer from a can. Beer cans are sprayed with an interior coating which means the argument that aluminum can impart a tinny flavour simply no longer has any merit. Cans are also more reliably airtight than the occasionally faulty crown-capped bottles and they are also, by design, light-impenetrable. This means that the beer in cans is better protected from the two elements (air and light) that might erode the quality of your beer. Beer in cans is therefore demonstrably better than beer in bottles,* and this hoppy yet refreshing style is definitely best enjoyed as fresh as possible.

Plus, there’s more beer per serving in a tall boy and, depending on the circumstances of my drinking and pouring, a decreased likelihood of the container breaking before I get to drink it is always a bonus (See above re: propensity to drink half a dozen in one sitting). 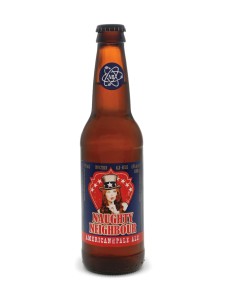 Lastly, these cans are better looking than the Naughty Neighbour bottles. Yes, perhaps the bottles had a sort of kitschy appeal in their “porno-DVD” graphic design, but these tall boys, done in a matte black finish that aligns them with the recently remade Head Stock cans, are infinitely more bad ass. Unfortunately, the “naughty” looking lady is still here, but she’s perhaps a slightly more tasteful “Strip Club sign” lass than her on-the-nose hat wearing predecessor?

And this has somehow devolved into bad art criticism so I’m going to stop and go crack another Naughty Neighbour can. Cheers.

*A little more on cans: There is a growing concern right now that drinking from cans might be harming those employed by one of the biggest can manufacturers, Crown Metal Packaging. Some folks are urging a boycott of canned beer in Ontario. I do not fall in that camp. First, because there is likely to be no effect from a boycott. This strike has been going so long that the company has literally already replaced all the striking workers. Second, not all the beer we consume comes from cans made by Crown Metal Packaging. Yes, most Ontario craft beer does in fact come from Crown Metal Packaging, but some doesn’t. Some of the Crown Metal cans we drink from come from their plants in the UK and Calgary that aren’t even on strike, and some do in fact come from the Toronto plant that is (or was) on strike. So if you opt to buy your next craft beer in glass bottles instead of cans, the likelihood that you are actually saving anyone’s job is really (impossibly) low. Also, there aren’t really too many options for affordable cans in Ontario so if you choose to boycott cans to show your support of the steelworkers’ union–which you’re welcome to do if you feel strongly enough about their issues–keep in mind you might actually hurt brewers who put their beer in cans (and sacrifice the freshness of your beer). I say, just drink the beer you like in the container you prefer. It will be fine.