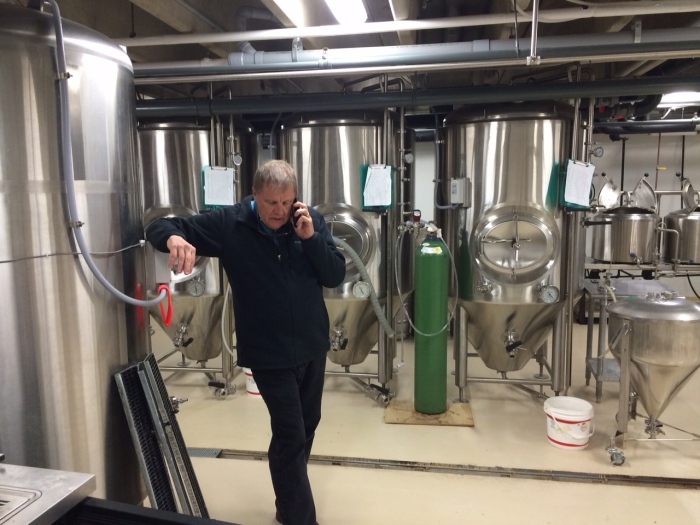 If you spent any of your twenties (or earlier) in the city of London, Ontario, it’s pretty likely that you had at least an evening or two at Jim Bob Ray’s, a bar that has long been a staple of The Forest City’s student nightlife scene.

Now, however, regardless of how you may feel about the (in)famous spot at 585 Richmond Street, the days of Jim Bob’s reputation as the quintessential London university drinking experience are numbered: Very soon the place will cease being “Jim Bob Ray’s” and will become Toboggan Brewing Co.

Opened in October of 1993 by Mike Smith, a longtime veteran of London’s bar and restaurant scene,  Jim Bob’s has actually already begun its slow makeover to a craft brew pub. Full disclosure: Mr. Smith is a longtime friend of my family’s. Mike spent Christmas eves at my house when I was a kid, my dad actually “worked” at an establishment he owns as something of a post-retirement lark, and a picture of me at age 12 is even hanging among the many that adorn the walls of one of his bars, the London institution, Joe Kool’s.

Personal connection aside, I find Smith’s plan to turn Jim Bob’s into a brewery fascinating for a number of reasons; not the least of which is that I think the success or failure of the move will serve as a perfect litmus test for the current state of Ontario’s craft beer scene.

Allow me to qualify that with a little bit of context.

London has long served as the perfect “sample city” for Canada. The demographics are such that, if a business or initiative is successful in London, companies can assume the move will be successful elsewhere in Ontario and in the rest of Canada. London, historically, is literally perfectly average. The demographics and consumer trends are almost totally in sync with the country’s average population make-up and their purchasing habits, thus when companies try something new, they often do it in London first. Case(s) in point: London was the first place in all of Canada to get cable TV and the first place in Canada to have a McDonalds. The Forest City embraced cable TV and Big Macs and, as a result, the rest of Canada was afforded the ability to eat greasy shit while watching mindless network television. You’re welcome.

London was also the home of the first Canadian debit cards, the first Rothman’s cigarette mini-packs, and the first ever drive-through Beer Store. Next time you roll up to a location of Ontario’s favourite foreign-owned monopoly and they deliver a large quantity of already-cold alcoholic beverages directly into the running motor vehicle you are currently driving, you can thank London fucking Ontario, baby.

Accordingly, I love the idea that a place that came to fame hawking cheapo Coors Light and Budweiser to hard-partying twenty-somethings in London is being converted to a small brewery. There’s no guarantee that Smith’s change in concepts will be a success, but that even Mike Smith–a guy who built his fortune on bars that are literally in Labatt’s back yard–has opted to embrace craft beer in Canada’s perfectly average city, is certainly a positive comment on the state of craft beer in Ontario. 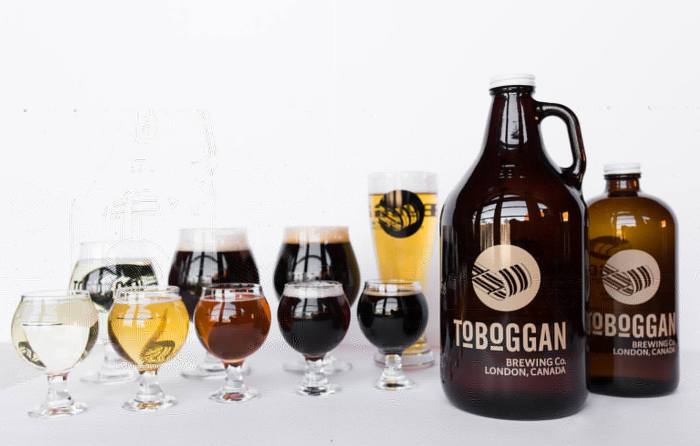 That said, some of Smith’s decisions for his fledgling brewery did leave this former Londoner and converted-craft-beer-snob/blogger scratching his head.

For example, Molson and Labatt products will be available on tap alongside local offerings at Toboggan Brewing Co.

When I met with Smith recently to tour his makeover-in-progress and sample Toboggan’s beers, he told me that, along with their own beers and a broad selection of Ontario craft offerings, Toboggan intends to pour offerings from the big guys.

Clearly, to a stout-sniffing Toronto sophisticate, this is counter-intuitive. If a craft brewer in the GTA were to announce their new beer-making business venture and then likewise reveal that Labatt 50 would be available in the tap room, they would be mocked and ridiculed until my throat was hoarse. To me (and presumably many other craft beer evangelists) the entire thrust of craft beer is that it is the established alternative to macrobreweries. Not only does craft beer exist to provide a more interesting-tasting option than over-marketed industrial lagers, but it also serves as something of a philosophical choice. Not to get too preachy, but to my mind craft beer provides conscientious consumers with a local, independent alternative for people who care about where the products they consume come from. Starting a craft brewery but allowing big brewers to sell their products in your tap room would be anathema in Toronto.

While there is growing evidence that London supports craft beer, the city is, as noted, “perfectly average.” Most people in Canada (and literally everywhere else in the world) still drink macro lagers, and so London, with their perfectly representative demographics, is likewise still very much a macro lager town.  Wholly embracing craft beer then is by no means a guaranteed ticket to success in London, and as he reminded me when I chided him about his decision to continue to sell Molson and Labatt products, Smith is trying to run a business.

The guy has clearly sunk considerable capital into installing a brewery in his bar and into making the place over and so, first and foremost, he wants the place to make money. When you’ve established a working business model selling Londoners industrial lager for the better part of four decades, taking a giant leap to selling only your own small batch beer is likely a vaguely terrifying prospect. There are, of course, exceptions that prove the rule: London craft beer emporium Pub Milos is enjoying success as a craft beer bar and the also-excellent Morrissey House recently opted to shun all products sold at The Beer Store; but Smith is opening a brew pub, not just a bar, and has the added wrinkle that his space is fucking huge. If you’ve never been to Jim Bob’s, picture a massive cavernous barn. The capacity for Toboggan Brewing Co. will be measured in multitudes of hundreds of people. Smith has a 10 barrel brewery in the basement. One busy day at Toboggan might very realistically exhaust their entire supply of beer. And so, out of necessity, Smith will carry other Ontario beers on tap, and, yes, Molson and Labatt products, alongside Toboggan’s own beer.

As for that beer (wow, it took a while to get to the most important part, didn’t it?), I can attest that it is extremely well made and the first styles that will be produced at Toboggan seem ideally suited to what Smith intends his brew pub to be. That is to say, when choosing styles to launch his brand, Smith clearly had his target demographic squarely in mind and one of the first beers I sampled was an extremely low ABV blonde ale. Yes, it’s a light beer. The idea of not scaring people off is obviously weighing heavily on Smith’s mind, and I got the sense that he is working to achieve a balance between what Tom Schmidt, the guy hired to develop Toboggan’s recipes, is capable of and the sort of beer that Smith wants on tap to introduce people to his new business. Smith told me more than a few times that he asked Schmidt to “tone down” some pilot batches.

Which is not to say that Toboggan’s beers are all going to be “safe.” Schmidt is a talented Czech-born beer maker with considerable experience, including a stint at Labatt and, most recently, making the beer for Toronto-based contract brewery, Spearhead. Along with the blonde, I sampled an amber ale, an IPA, and a stout that are all slated to be part of Toboggan’s initial line-up and, while nothing was a blow-my-face-off-revelation, I would confidently say that each of the beers were excellent examples of their respective styles.

Generally then, Toboggan Brewing Co. seems ideally suited to being something like the physical embodiment of what we often refer to as “gateway beers.” The place will have broad appeal given Smith’s London credentials and the well-made beer will act as a perfect introduction to more interesting and experimental offerings (which Smith says will come soon enough). And hey, if you’re bringing along your narrow-minded, lager-drinking friend, there’s going to be some Labatt shit here, too.

So while it would be easy for a snotty Toronto beer blogger to dismiss the whole idea as “playing it safe,” which was my first reaction, I think ultimately Smith has shown his business instincts to be sound and Toboggan Brewing Co. will be a success in London. Not only will he tap into a growing demographic of Ontarians who appreciate interesting beer made by small companies, but he’ll do so in a way that will have broad appeal and will almost certainly bring new craft beer fans onboard. Furthermore he’ll do it by converting an established student haunt smack-dab in the downtown core that dates back over 20 years and a place that was arguably partly responsible for big beer’s stranglehold on the area. That Smith has recognized the tide change and opted to modify his business–in the town Labatt makes their beer no less–is not only indicative of his business acumen but, hopefully, a trend in consumer habits.

Now we just have to hope that, much like cable TV and Chicken McNuggets, the rest of the Ontario will follow suit.