Perhaps I’m a touch jaded from acting as Ontario beer’s resident angry old man for the last few years, or perhaps it’s a side-effect of not leaving the house all that much in the two years since my son was born, but it’s not often that I find myself wholly impressed by a new experience with a brewery.

But that was certainly the case this past week after I finally managed to pay a visit to Silversmith Brewing Company in Niagara On The Lake and I was altogether pleasantly surprised.

Founded in 2011, the brewery is in an Anglican church that was built in 1894, and was generally well preserved after having acted as an antique store for 25 years after its life as a church. Much of the church’s charm remains in the form of red-brick walls, exposed beams, and an ivy-lined exterior, but the interior has been converted into a down-right excellent tasting room and bar replete with live wood and thoughtful touches like draught handles made from repuprosed ball-peen hammers. 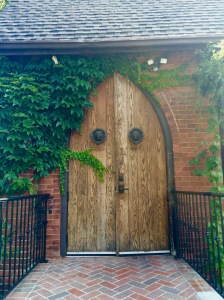 It’s the kind of place that had me wanting to use words I don’t usually use, like “lovely” and “charming” (I didn’t say those things, but I almost did). Unfortunately, my only means of conveying that charm in this blog post will be iPhone pictures that I took while attempting to not only chat with Matt Swan, co-founder of Silversmith, but also wrangle my ever-wriggling toddler who was in tow when I visited. 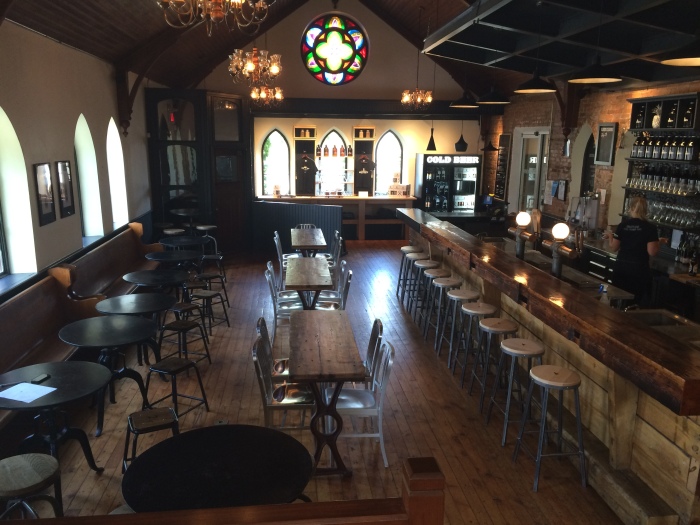 Now I had tried a few of Silversmith’s beers and I had always been impressed. Their black lager, which seems to be the beer of theirs that most often makes its way to bars in places like Toronto, might just be the best made-in-Ontario example of a Schwarzbier I’ve ever had. That, in and of itself, has always piqued my interest about Silversmith, but, owing to my particularly fervent brand of craft beer evangelism, I’ve also always been endeared to Silversmith’s “vibe” for lack of a better term: there’s no cheesy marketing here, the content of what marketing they do put out is straightforward, the soundbites they provide to journalists like the guys who made Straight Up is typically on point–in short, it’s always seemed to me like the Silversmith dudes get it. 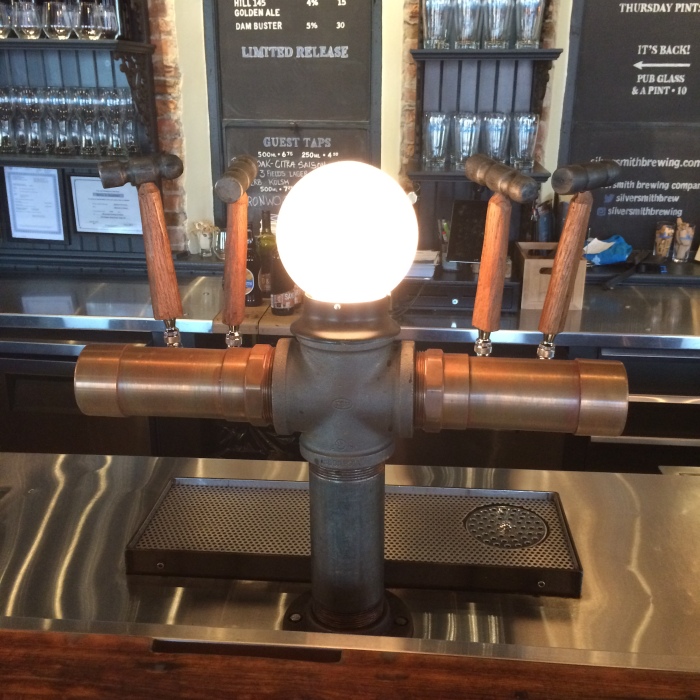 That is, they seem to understand the inherent and necessarily collaborative nature of craft beer and don’t seem afraid to speak up against the always-frustrating powers-that-be-in Ontario. Most importantly, they seem to be in the business of craft beer because they like beer–an inkling of mine that is confirmed by the fact that the official story for the reason the place was founded seems to be the fact that co-founders Chris Pontsioen and Matt Swan were tired of drinking shitty beer.

But enough of all that, let’s get on with what’s important: how’s the beer?

When I left, I took along with me a four pack of everything Silversmith was currently offering. In addition to the always-impressive Black Lager, this included a Bavarian Breakfast Wheat, Hill 145 Golden Ale, and a Dam Buster Pale Ale.

The 5% flagship Black Lager, as it has been whenever I’ve had it on tap, was exceptional. It delivers an abundance of the heavy, dark malt aromas and flavour of a good stout but with a remarkably crisp finish. It’s an ideal beer when you’re looking for big flavour but not the heaviness of a dark beer. It’d also serves as an excellent gateway beer to dark beer, if you happen to know anyone who is afraid of the dark (beer).

The Bavarian Breakfast Wheat is a classic German Hefeweizen and while I maintain that any beer can be a breakfast beer if you’re determined enough, the moniker fits here. It pours a hazy golden straw colour with some nice head that dissipates to a thin, but still-present layer and maintains nice carbonation. The aroma is something like spicy, Juicy Fruit gum and coriander and the flavour is spicy, boozy, and a little bitter. I’d call this a wheat beer with a little more oomph (yes, that’s a BJCP term). The mouthfeel is a touch thin and the finish is bitter and lingering. This would hold up equally well alongside morning pancakes or even reheated pizza after a late night.

Hill 145 Golden Ale was the least complex of Silversmith’s offerings–but that’s not meant to be disparaging. It’s got some subtle biscuit and fruit on the nose with a suggestion of citrus and honey flavours and only enough hops for a clean, crisp finish. At just 15 IBUs and only 4% ABV, this is a very nice, malt-forward session beer and even Silversmith’s in-house menu refers to it as a “patio crusher.” I concur.

Dam Buster British Pale Ale might throw some Ontarians who have come to accept the classification “pale ale” to mean anything with hops that isn’t 8%, because this isn’t in fact a pale ale, but rather has more in common with a traditional English bitter. It’s very lightly hopped and light-bodied and the hops are there mainly to add aroma. It pours a nice rusty orange and the nose has mild citrus, but is more dark fruit and bready caramel. The flavour, too, is bready caramel, dark fruit, a touch of spice, and a nutty finish. A very nice bitter, if oddly named.

Along with this line-up of beers, Silversmith offers a simple menu that I did not have time to sample owing to the early hour and my son’s disinterest in sitting still for more than five minute; however, while he sprinted behind the bar, into the kitchen, and all around the tasting room, I did have time to snag a menu and can tell you that there are just a few items to eat, including oysters, wings, wurst, a handful of sandwiches, and some sides and snacks.

Silversmith is definitely worth the visit. The beer is good, the atmosphere is great, and the people running the brewery are the real deal. It’s probably enough of a destination on its own, but if you’re in wine country doing a tour, Silversmith is a grape’s throw from some good Ontario wineries like Southbrook, Pilliteri, and Trius. It’s also just down the road from Oast House, who also happen to make some good beers.