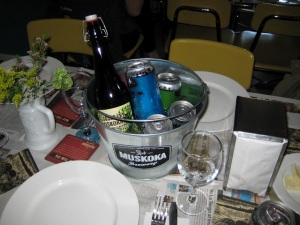 Whoever said that you can have too much of a good thing probably wasn’t talking about beer and meat.

Because honestly, last night, at Muskoka Brewery‘s second Hidden Kitchen event held at goed eten, I had absolutely no qualms indulging in obscene quantities of Mad Tom IPA and what can only accurately be described as a shit-ton of barbecued meat.

The event is part of a new series of exclusive foodie evenings capitalizing on the city’s pop-up kitchen trend and is backed by Muskoka Brewery for “the people who are as passionate about food as [they] are about beer.”

Hosting the events is food-scene veteran Ivy Knight, writer for The Toronto Star, Food & Drink, Toronto Life, and The Globe and Mail among others, and editor and co-founder of the fedgling foodie website, Swallow Food.

Food for the Hidden Kitchen events is prepared by buzz-worthy chef Matt Kantor who has a made a name for himself in the city’s culinary scene by forgoing a traditional kitchen in favour of a transient attitude toward cuisine and a savvy approach to social media, perhaps most notably evidenced by his renowned Secret Pickle Supper Club.