On the short list of things I’m really enthusiastic about, beer, food, and books all rank fairly highly.

That’s why I was pretty excited to check out a review of copy of the book “Food & Beer,” by Daniel Burns, Jeppe Jarnit-Bjergsø,and Joshua David Stein.

Burns and Jarnit-Bjergsø share space in Brooklyn where their respective attached homes, Luksus and Tørst, elevate beer to the status it deserves as they pair it with both casual food and fine dining in two environments that rank among the coolest places to drink a beer I’ve ever seen. Tørst is humbly self-described as a neighborhood bar, but it is in fact a barnboard, white-marble, and mirrored shrine to good beer where serious beer enthusiasts come to drink from Tørst’s custom wine glasses and beer is the only beverage served. Essentially, Jarnit-Bjergsø is overseeing the physical embodiment of the happy place from my dream journal (Incidentally Jarnit-Bjergsø is also the evil twin who founded Evil Twin Brewing).

Daniel Burns oversees the menu of casual fare at Tørst where, at the back of the bar is a “secret” door leading to Luksus, a 16-seat tasting menu restaurant that Burns helms, where diners are “transported to a Nordic-inspired evening, influenced by the chef’s time in England and America, and his childhood in Nova Scotia.” Each dish at Luksus is paired exclusively with beer chosen by Jarnit-Bjergsø. Wine and cocktails are not available. Because fuckin’ eh, man.

Burns and  Jarnit-Bjergsø have written this book with Joshua David Stein (the food critic for New York Observer) and, as you might have guessed by the flurry of credentials I’ve already thrown at you, the book is dope, as the kids say. END_OF_DOCUMENT_TOKEN_TO_BE_REPLACED 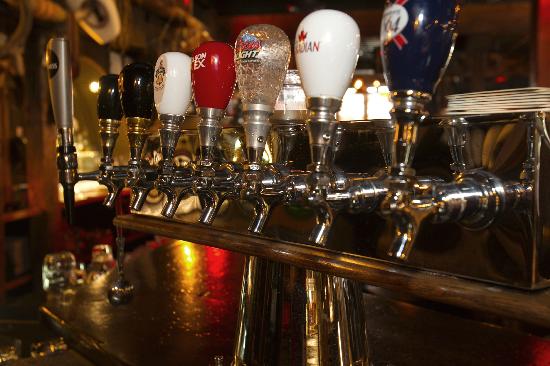 When it comes to food, wine, and spirits, most of the city’s restaurants have things down.

Look to any ranking of the city’s best restaurants and you’d be hard-pressed to find any among them who haven’t taken some time to cultivate a thought-out list of wines. Since arguably the dawn of going-to-another-place-to-eat-things-made-by-other-people, a separate menu or even a fucking table topper with a list of available vintages has been a practically mandatory requirement.

And it has it been likewise well established that the closer and fresher the ingredients restaurants use to cook their meals, the better said meals will be. Indeed, if you’re in a restaurant that isn’t touting locally-sourced ingredients somewhere on their menu, I’d venture that you’re not in a very good restaurant.

So too are virtually all bars and restaurants embracing “cocktail culture.” You can hardly swing a Hawthorne strainer in this town without hitting a muddling bartender who will insist you call them a mixologist while they whip up their house-made honey kombucha with shiso and Horchata.

So why the hell is virtually no one in the city giving beer the same level of respect we snotty Torontonians demand of virtually every other substance we cram in our suck holes?

Well, throughout the next month, I’m fixing to find out. END_OF_DOCUMENT_TOKEN_TO_BE_REPLACED

A few weeks ago, I was lucky enough to be among a select group of “media influencers” chosen to attend a private dinner at the still-under-construction second location for Toronto’s Rock Lobster. Now if hearing “media influencers” and “private dinner” makes you picture an intense session of social media junkies instagramming the shit of their meals, you should know this: 1) You’re absolutely right, and 2) I don’t care what you think I ate an amazing seafood dinner and got an article out of the deal.

You should also know this: In addition to the aforementioned delicious meal, the evening provided some excellent libations. Barrel-aged cocktails are the name of the game at Rock Lobster so it was no surprise when a handful of good ones ended up in my belly that evening. What was a surprise though was the appearance of a collaboration I had heretofore never heard of: Trombsterdam, a seemingly-right-up-my-alley joint effort from Tromba Tequila and Amsterdam Brewing Company. END_OF_DOCUMENT_TOKEN_TO_BE_REPLACED

Because I have a super busy Sunday planned already,  there are, of course, two pretty sweet food and beer events happening that day that I can’t attend.

While I’m watching some talented actors perform scenes written by me and my Second City writing class in the unfortunately titled graduation show, Fifty Shades of Gay (no, really, that’s the name of our comedy show), there will be not one but two great eating and drinking opportunities happening elsewhere–one just a few scant blocks from my home.

The first is Lobstah Palooza, which I’m assuming is misspelled so as to sound the way the east-coast lobsters you’ll be boiling alive and eating might say the word if they had the ability to speak. Cute!

Hosted by Rock Lobster‘s Matt Dean Pettit and Food Network Star Kevin Brauch (aka The Thirsty Traveller) the food is pretty much guaranteed to be good. In  addition to corn on the cob and other summer fare, there’s lobster salad, and, naturally, the price of your ticket gets you a 1.5 pound lobster. What you name it is entirely up to you, but I think “Ben” has a lovely ring to it since I scooped you to this bitchin’ good time. END_OF_DOCUMENT_TOKEN_TO_BE_REPLACED

On Monday night, as part of Ontario Craft Beer Week, I attended a collaboration dinner with Harbord House and Great Lakes Brewery. And honestly, it’s taken me until now to write about it because I’m pretty sure I’m still full.

The evening was hosted by Harbord House owner John Oakes and Great Lakes Brewer David Bieman and consisted of four courses, each paired with a unique beer offering from Great Lakes.

In case the details thus far aren’t making it clear: This was a fucking great night.

Shockingly, after having lived in the city for five years, this was my first time at Harbord House and, thanks to the food they presented Monday and their clear appreciation of craft beer,  I’ll certainly be back. As you may guess if you follow me on any form of social media or read my writing at blogTO, this was not my first time drinking Great Lakes beer. And, while I knew to expect great things, I was also really impressed with their beers Monday.

As the seating was designed to be somewhat social, my friend Josh and I were sat with a couple which gave me a valuable chance to get a sort of layperson’s take on the food and beer. Like a lot of things I say, this probably sounds elitist and snotty, but I assure you, it’s quite the opposite. What I mean to say is that, when one only drinks in the company of other beer nerds too much, it’s all too easy to get caught up in the world of caramel backbones, IBUs, lacing, dry hopping techniques etc. and it’s easy to forget that hey, some people just like to drink fucking beer because they like the taste of fucking beer.

And so, in an effort to give you a fair snapshot of the evening, in case my lone blackberry image above doesn’t do it for you, I’ll include a run down of each course and the coinciding beer, as well as the thoughts offered by my table mates, whom I’ll refer to as “Josh,” “Lynne” and “Travis” because those are their actual names. END_OF_DOCUMENT_TOKEN_TO_BE_REPLACED

Whoever said that you can have too much of a good thing probably wasn’t talking about beer and meat.

Because honestly, last night, at Muskoka Brewery‘s second Hidden Kitchen event held at goed eten, I had absolutely no qualms indulging in obscene quantities of Mad Tom IPA and what can only accurately be described as a shit-ton of barbecued meat.

The event is part of a new series of exclusive foodie evenings capitalizing on the city’s pop-up kitchen trend and is backed by Muskoka Brewery for “the people who are as passionate about food as [they] are about beer.”

Hosting the events is food-scene veteran Ivy Knight, writer for The Toronto Star, Food & Drink, Toronto Life, and The Globe and Mail among others, and editor and co-founder of the fedgling foodie website, Swallow Food.

Food for the Hidden Kitchen events is prepared by buzz-worthy chef Matt Kantor who has a made a name for himself in the city’s culinary scene by forgoing a traditional kitchen in favour of a transient attitude toward cuisine and a savvy approach to social media, perhaps most notably evidenced by his renowned Secret Pickle Supper Club.