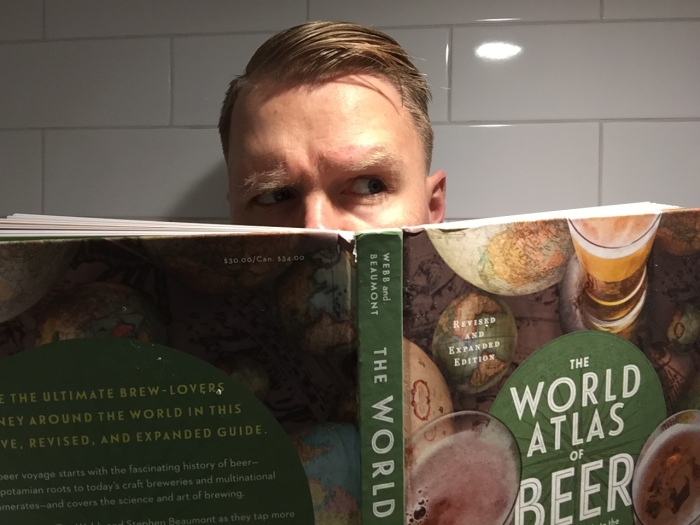 First published in 2012, The World Atlas of Beer by Tim Webb and Stephen Beaumont is a beer book about which many nice things might be said.

It might be said that it’s fairly remarkable in that it is sweeping in scope; taking you on a beer tour with brief stops in literally almost every part of the world; yet somehow manages not to be tiresome or overwrought in its aims. With excellent illustrations and photographs, one might also say that this book, billed as “the essential guide to the beers of the world,” is as interesting to look at in passing as it is to read in depth and that it would make a fitting coffee table book for lovers of beer both professional and novice.

The book touches on the history, the science, and the art of beer and features everything from basic beer definitions, to explanations of the nuances of style, to pairing, pouring, storing and cellaring beer, and so one might easily say that this is a good candidate for the only beer book you might ever need.

Of course, I’m not going to say any of those things. END_OF_DOCUMENT_TOKEN_TO_BE_REPLACED

Be forewarned: This is a super long post. Like annoyingly long. Like “Really, Ben? Ever heard of editing?” long. But this is a topic with a lot of angles to be covered and a it’s one which I felt required fulsome exploration. Also, it’s my blog and you’ve been reading my shit for free for five years so I can do whatever I want. K, thanks.

Canada’s craft beer industry is a friendly and welcoming scene.

Spend any amount of time in the company of the people who are making and drinking craft beer in this country and you’ll quickly be drawn in by the engaging events and the comradery that exists even among so-called competitors. Craft beer is fun and this inclusionary atmosphere (along with the interesting beer) is likely a big part of the reason more people are discovering craft beer and why estimates put small breweries’ share of Canada’s beer market at around 10%.

So why then, in an industry that seems implicitly welcoming and inclusive, are almost all those friendly faces white?

Scan a newspaper for news of a brewery opening in your town, check out local website coverage of the latest craft beer festival in your area–heck, just do a stock image search for “people drinking craft beer”–and you’ll see pretty quickly that Canada’s craft beer scene is whiter than a country club fundraiser for sustainable organic mayonnaise.

Toronto in particular, where Canada’s craft beer charge is arguably being led, is ranked among the most multicultural cities in the world, and is the most diverse city in the country with the last available census data stating 47.7% of the city’s population comprises “visible minorities.”

So why don’t any of these people of colour seem to be drinking, making, or selling beer? END_OF_DOCUMENT_TOKEN_TO_BE_REPLACED