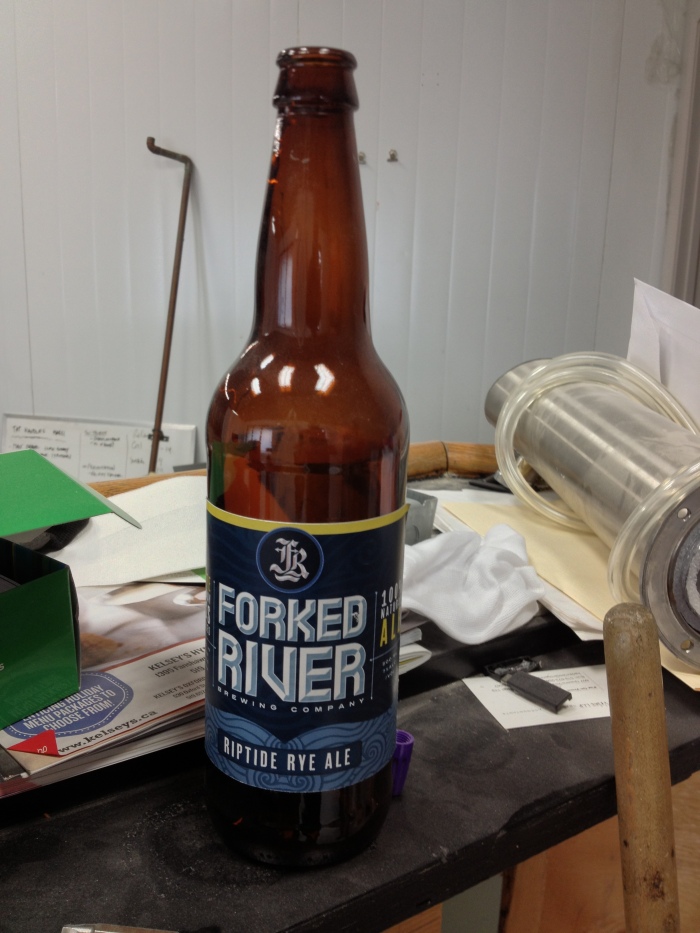 Last weekend I made the pilgrimage back to my hometown of London Ontario for the obligatory feasting we all indulge in for the simple reason that the weekend marks the return of everyone’s favourite Jewish zombie carpenter.

And while I was excited to get together with old friends and family and to eat ham in honour of JC’s big comeback, I was also excited to try some new beer, namely that brewed by London’s first craft brewery to appear in as long as I have been alive, Forked River Brewing.

In case it isn’t clear in the miniature media maelstrom that Forked River Brewing’s founding trio has endured in various local outlets as of late, the guys behind the company are really down to earth and cordial–a point made all the more clear when brewmaster Dave Reed agreed to meet me at their brewery on Easter Sunday just so I could drink some of their beer (to be fair he might have simply agreed to meet me so that I’d stop emailing him drinking some of their beer).

Nevertheless, the fledgling brewmaster took a break from his feasting and I ducked out of my in-laws to head to an industrial park in the city’s east end to drink a few beers. Now, what I sampled on Sunday wasn’t exactly the same product that will be available commercially (the brewery isn’t quite up and running just yet). Instead, the brews were done on Forked River’s 10 gallon pilot system which currently lives at Dave’s house, but they were both made to the same specifications that will soon be brewed in large batches and I can tell you this: London Ontario beer fans finally have something local they can get excited about.

The first beer Dave poured was their Capital Blonde and while blonde is the closest available approximation for this beer’s style, the reality is that the beer is something like a hybrid. It’s composed of Canadian 2-Row, and Munich malts, and while it’s got Centennial, Cascade, and Amarillo hops, they’re largely here to give the beer some aromatics and a bitterness in the beer’s finish. The ABV is about 4.8% and IBUs are just 18, making the flavour of this beer something like like a combination Blonde/IPA–which is just about as awesome as it sounds. The low ABV means it’s incredibly easy to drink, but it’s got a hell of a lot more going for it than a low-alcohol macro-lager. It seems ideally suited to the market Forked River is attempting to attract in London: not too scary for conservative beer drinkers, but interesting enough for people who like beer with taste. The guys at Forked River have taken to calling it a “patio pounder” and it seems an apt description for a beer I could easily foresee drinking a few of in the sunshine next time I’m in London (Hey Barney’s, get this one on tap!)

Their Riptide Rye, the other beer in their lineup, probably has just a little more going on that will appeal to drinkers who like something slightly more complex. As you may have guessed from the name, this beer’s a rye pale ale, composed of 23% rye malt with English crystal malt and some English amber malt filling out the profile–though that recipe might get tweaked slightly before it goes into production. It’s also got Centennial and Columbus hopping but the hops mostly just comes through in the aroma as this beer doesn’t have any heavy bitter flavour or aftertaste that you might expect from an RPA. With 38 IBUs, the bitterness is there, for sure, but it’s not overwhelming and, with its solid, malty, caramel backbone, this seems uniquely suited to be one of those “gateway beers” we seem to be talking about more and more. That is, if you can convince someone to put down their pint of lager and pick up one of these, the progression to bigger and bolder craft beers won’t be hard fought. This version of Riptide Rye was a sessionable 5.5% (final version might creep to 5.7%), and, given the increasing presence of rye pale ales in Ontario’s craft beer market, the idea of brewing a slightly more accessible version seems a very smart choice for a second beer (and that Dave discussed playing with the beer’s gravity and mused about its potential to be dry-hopped also bodes well for this beer’s future among fans of bolder styles). This is a very good beer.

The guys at Forked River clearly have plans to brew some experimental stuff once they get things up and running and while Dave was hesitant to commit to any future brews I will say we discussed an award-winning homebrew of his in a style rhymes with funkelreiss.

Dave and his partners Andrew Peters and Steve Nazarian are still waiting for folks to come in and hook up their burners and the exhaust for their kettles this week, and they hope to have audits conducted on the kettles the following week, but once that’s completed they plan on brewing right away with an eye to having some beer for sale by the first week of May. It’s usually safe to expect delays when it comes to the opening of a brewery, but they’re close–oh so close–and the London beer drinking sect is anxiously awaiting. Dave mentioned a handful of people who’ve already poked their heads in to the still-under-construction space at 45 Pacific Court looking for beer as well as a persistent elderly caller who’s curious to know when she might send her husband out to grab a few bottles.

Your best bet is to stay tuned to Forked River’s twitter and facebook accounts for news of their first brew day and to head to Milos’ Craft Beer Emporium shortly thereafter looking for pints: The owner of London’s sole craft-exclusive bar, Milos is reportedly so excited to begin serving a locally-brewed option, he’s already serving beers on Forked River Brewing Company coasters.

If you live in London and want to hear what the guys have to say about opening their brewery, they’re taking part in a “Fuse Morning”–a breakfast and live chat with “creative people doing creative things”– on April 5th at 8:30am. More details are available here (no, there won’t be beer there).

6 thoughts on “Forked River Brewing Company: So how’s the beer?”