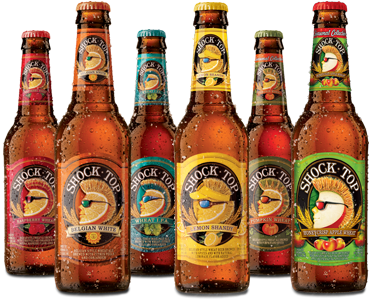 Shock Top is a beer made by the massive, multinational brewing company AB-InBev.

And while we, the stout sniffing cognoscenti, have always known in our heart of hearts that Shock Top is part of the macrobrewery effort to get “crafty” as a means to compete with (and presumably crush) small brewers, it doesn’t make it any less galling to actually see that strategy laid out on paper.

But now we can.

Yes, Ben’s Beer Blog has obtained a document, labelled a “Connections Brief” and dated September 16, 2014, that actually lays bare the 2015 strategy to pass Shock Top off as craft beer and, while your inclination while reading the marketing-speak-riddled nonsense (Link to PDF below), might be to assume that this is a joke I created, I assure you it is not.

The brief discusses the plan for new advertising for Shock Top and explains that the increased marketing is because “Shock Top is Labatt’s big bet in the battle against Micro Craft.” And while I wish that “Micro Craft” were a bearded super villain hoping to take over the world one firkin at a time, it seems clear that this is the term that Labatt uses to discuss the scourge that is brewers making craft products in small batches–brewers who are incidentally (and awesomely!) “eroding Labatt’s share,” according to the document.

The marketing plan, it seems, is to build on the opaque nature of the story of Shock Top’s origins because Labatt feels it “has the small brewer/craft credentials to compete.” Indeed it looks as though they look to build on the misconceived notion that Shock Top “is from a small brewer,” something that their market research has shown 75% of people believe.

There is no shortage of ridicule-worthy bullshit in this very short brief (probably most notably that it contains the nonsensical sentence “flavoursome taste to drive Shock Top penetration with Experience Maximizers in the ‘Reward Myself’ need state.” Holy shit that’s a mouthful of corporate garbage), but the short of it is this: Labatt is hoping to increase the production volume of Shock Top by 40% next year and is planning to spend $2.7 million dollars in 2015 to make people think that Shock Top is a craft beer.

First, I’ll give you a minute to address the wounds on your hand after you presumably put your fist through the nearest car window after reading that last insane sentence.

Now that you’ve stemmed the bleeding, let’s talk about the crazy irony of this statement: Labatt is spending more money next year than most craft brewers will ever spend on marketing in the lifetime of their breweries in order to pretend that one of their brands is made by a small, unknown brewer. This is all kinds crazy and evil at once.

To give you some perspective, in 2012, the Canadian division of the Anheuser-Busch InBev brewing corporation posted after-tax profits of more than $9 billion (source). And now, because people are drinking more craft beer, Labatt is hoping to intentionally mislead consumers into thinking that one of the beverages they make (soon to be available in chocolate and spiced pumpkin!) is actually made by a smaller company so they can get some of that sweet, sweet craft dollar.

Craft beer in Canada is experiencing a surge in sales because people are finally beginning to get out from the collected steaming pile of roughly 50 years of marketing that has brainwashed us into thinking that all beer is supposed to taste like watery variants of the same rocky mountain goat urine. That is, craft beer is booming largely because people are rejecting macrobrews and learning that smaller companies are making interesting products about which they are passionate.

Perhaps we can be optimistic that craft beer has had such an effect on the market for the same boring lagers that the big guys are now spending millions of dollars to parade as craft brewers, but it’s ultimately pretty maddening that Labatt is hoping to use their marketing muscle to trick people who have intentionally moved away from mass-produced beer into drinking mass-produced beer disguised as craft beer.

Check out a scan of the brief here (I redacted employee names): Labatt Connections Brief Sept 16, 2014.

Given how much there is here to rage about, I feel like I only scratched the surface so please feel free to sound off in the comments below.