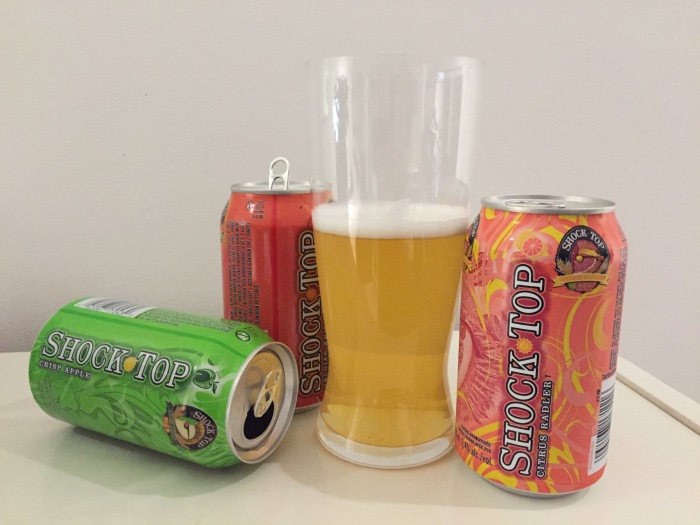 Quite some time ago, I realized I was getting close to having 5000 followers on twitter.

Accordingly, I tweeted that, should I reach that milestone within the next week, I would purchase and drink the variety mix pack from Shock Top and record the experience. People seemed enthused by the idea of a beer snob drinking Shock Top.

I reached 5000 followers the next day.

For those who don’t know, Shock Top is a beer that is marketed as a “Belgian Stye Wheat Ale” but is in fact liquid garbage. First produced in 2006, the beer is made by Anheuser-Busch InBev SA/NV, a marketing company that controls roughly a third of the world’s beer; however, this beer is rather dubiously marketed as a craft beer. It actually says on the can that it is from “Shock Top Brewing Co.” and, in bars, it is typically positioned by Anheuser-Busch InBev SA/NV to compete with craft beer among consumers who don’t know any better. I once enjoyed a considerable amount of traffic on this very blog back in September of 2014 when I managed to get my hands on a marketing brief prepared by Canadian Anheuser-Busch InBev SA/NV subsidary Labatt that suggested they were planning an expensive, intentionally misleading ad campaign to promote Shock Top in Canada as craft beer after market research revealed how many of the beer’s drinkers were misinformed about the beer’s origins.

The original Shock Top is something like a Belgian Witbier–in much the same way that the Olive Garden in the Magic Valley Mall in Idaho is something like Tuscan dining.  Originally released as Spring Heat Spiced Wheat in 2006, the brand was a rather transparent attempt by ABI to release a shitty witbier that would compete with Blue Moon, another shitty witbier, this one created by Miller-Coors with the obvious purpose to trick dumb people into thinking they were drinking craft beer and to compete with the growing small brewer segment. Here in Canada, Shock Top, the beer marketed as a product of a non-existent craft brewery in St. Louis, is actually brewed in Labatt’s facilities in London, Creston, Edmonton, Montreal, Halifax, and St Johns. Blue Moon is marketed by Molson-Coors in Canada as “Belgian Moon” because a Toronto craft brewery hilariously bought the rights to the name Blue Moon in Canada. In a pinch, you might also drink Rickard’s White if shitty witbier is your thing as it seems to be essentially the same beer, but with perhaps a different ratio of butt beer.

But I digress. You came here to read about me drinking this shit. END_OF_DOCUMENT_TOKEN_TO_BE_REPLACED

Canada is about to be the benefactor of a “new” beer thanks to the increasingly greasy quest for big brewers to create/market/re-imagine/co-opt brands that deliver some sniff of “craft” credentials.

That is, Molson-Coors has announced that Blue Moon, a hugely popular beer sold by Miller Coors in the United States is coming to Canada.

Er, coming back to Canada for the first time?

Shit, I don’t even know where to start with this one.

So let’s start from the beginning: Blue Moon is a Belgian-style, cloudy, unfiltered wheat beer that advertises notes of coriander and citrus and is served with an orange wheel garnish. It was developed by Coors. Its labelling says it is a product of Blue Moon Brewing Co. In the United States, it is usually mentioned in at least the top three names of beers that seem developed by big brewers to intentionally mislead people into thinking it is a craft beer. Case in point, this statement from the American Brewers Association, issued in December of 2012: END_OF_DOCUMENT_TOKEN_TO_BE_REPLACED

In case you’re not among the 23,405 people who stopped by my blog on September 22, you aren’t one of the visitors who are still finding Ben’s Beer Blog in numbers that put my former best traffic days to shame, or you haven’t stumbled onto one of the many outlets who picked up the story after I wrote about it, you should know that for lack of a better term, I basically exploded the internet last week with a story about Shock Top, a beer that is made by Labatt and one for which they were planning a less-than-honest advertising campaign.

Obviously the story received the level of attention that it did because most people feel upset about the news that a large brewery was attempting to pretend to be a small brewery in order to increase sales of one of their beers. Indeed, by and large, that has been virtually everyone’s reaction–with a small but notable exception: Among the comments for that post, in the responses on reddit forums, and via twitter, there has been a small but vocal minority whose response has essentially been, “Who cares?”

This minority, some of whom I’ve talked to directly and others who felt the need to comment anonymously, have made roughly the same argument with varying degrees of tact and merit and that argument is “If the beer tastes good, drink it.” END_OF_DOCUMENT_TOKEN_TO_BE_REPLACED

Shock Top is a beer made by the massive, multinational brewing company AB-InBev.

And while we, the stout sniffing cognoscenti, have always known in our heart of hearts that Shock Top is part of the macrobrewery effort to get “crafty” as a means to compete with (and presumably crush) small brewers, it doesn’t make it any less galling to actually see that strategy laid out on paper.

But now we can. END_OF_DOCUMENT_TOKEN_TO_BE_REPLACED

Over the course of the last few blog posts, I’ve been trying to make the argument that “good” bars and restaurants need to incorporate thoughtful draught selection into the dining and drinking experience they provide. It’s something I feel strongly about and I hope that my writing as of late has contributed to the conversation on the subject.

Recently, however, I had an experience that made me realize that the inverse is also something worth talking about; namely places that do incorporate a thoughtful draught selection really ought to be held to account to provide a “good” restaurant experience.

I have a feeling that this post might piss some people off, but the thought came to me Saturday night when I popped into C’est What for a few pints.

I’ve been there plenty of times before, but this was the first time it ever dawned on me that C’est What is, to put it frankly, pretty awful. END_OF_DOCUMENT_TOKEN_TO_BE_REPLACED