Originally brewed as a one time only offering in 2009 to celebrate the brewery’s tenth anniversary, Ten Bitter Years proved so popular with local beer drinkers that Black Oak has opted to bring it back once a year every year since. Each year, however, the small batch that Black Oak brewed was available only at the brewery’s retail store and typically sold out in a hurry; leaving the majority of the beer’s fans, well, uh bitter, I guess. 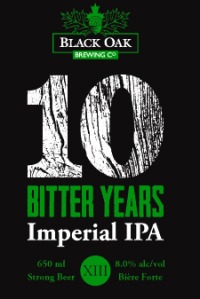 Now however, the staff at Ben’s Beer Blog–i.e. me–have learned that Ten Bitter Years will be available year round (year round!) at the LCBO in 650ml bottles that feature this snazzy new art.

And, in order to celebrate the release, Black Oak will be holding a launch party at the SummerHill LCBO (aka my happy place) on June 1st 2013 from 12-4p–because when a beer is this good, you really want to start drinking at noon. Seriously.

As for the beer itself, if you’ve never had it before, prepare yourself for awesomeness, then read these notes via Black Oak’s soon-to-be-issued press release:

The popularity of 10 Bitter Years is due to its enchanting aroma of pine, grapefruit, mango and pineapple—derived from wet hopping and double-dry hopping using three varieties of hops—married to a balanced, rich, full-bodied caramel malt taste and a touch of warming alcoholic smoothness that leads to a bitter drying finish. Head Brewer Simon DaCosta refuses to reveal the “top secret” recipe of grains and hops that he and Assistant Brewer Jon Hodd use to produce the popular beer, but we won’t pry as long as they keep making more of it.

In short, the beer tastes quite good and now you’ll no longer have to wait (or drive to Etobicoke) to get it! LCBOs. June 1st. Mark you calendar.