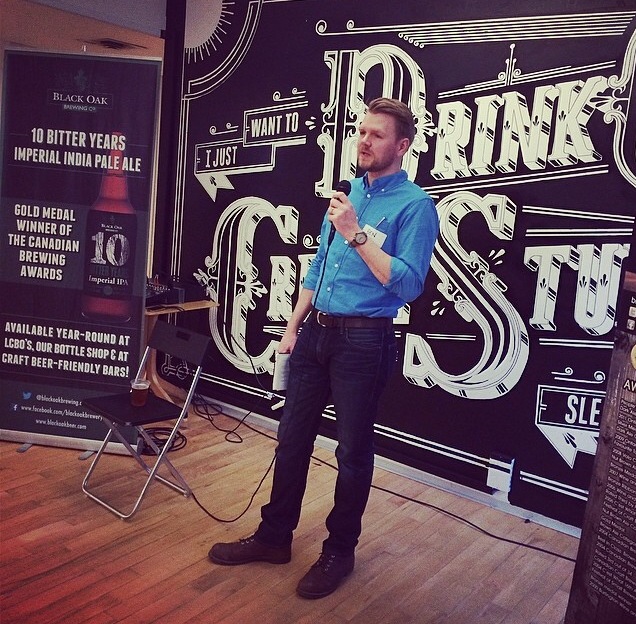 Last week, I hosted an event organized by Orchestra Marketing that looked to combine the typically forced act of “networking” with the slightly more enjoyable act of drinking beer. Appropriately, they called the event “BeerWorking” and what it boiled down to was essentially non-romantic speed dating wherein the participants received a different beer each time they rotated to a new table of people to meet.

My job, as the evening’s host, was to fill the participants in on some of the finer points of beer tasting (disclosure: I was paid to do this. I don’t wander the streets looking for people to preach beer stuff at [much]).

The event was pretty laid back and pretty much guaranteed to be a success (easy money for me! *mimes guitar solo*) given that the organizers were on the ball, the space was decent, the room was full of people eager to meet other people, and we were all sampling tasty beer from the good folks at Black Oak Brewery; who make some downright decent beverages.

However, the role of host at this shindig was originally supposed to be played by Crystal Luxmore, a fellow beer scribe who is a Certified Cicerone and a Prud’homme Beer Sommelier (i.e. a person who knows how to talk about the finer points of beer appreciation). I was asked to fill in for her rather last minute (presumably because Crystal was busy getting more beer certifications somewhere) and, while I can talk all day about the politics, marketing, and business of beer, I’ve never really been asked to walk someone through the finer points of pouring said tasty beverage into their suckhole.

Which is not to say I don’t know how to drink a beer (see: my muffin top), only that I wasn’t well versed in ways to get people talking about beer in a meaningful way.

My solution of course, was to cheat.

After walking folks through the steps of beer appreciation, namely thoughtfully considering each beer’s appearence, aroma, flavour, mouthfeel, and finish, I offered them the cheat sheet below so that they might have some of the pretentious lingo needed to really sound like a dick when pontificating on their beer. 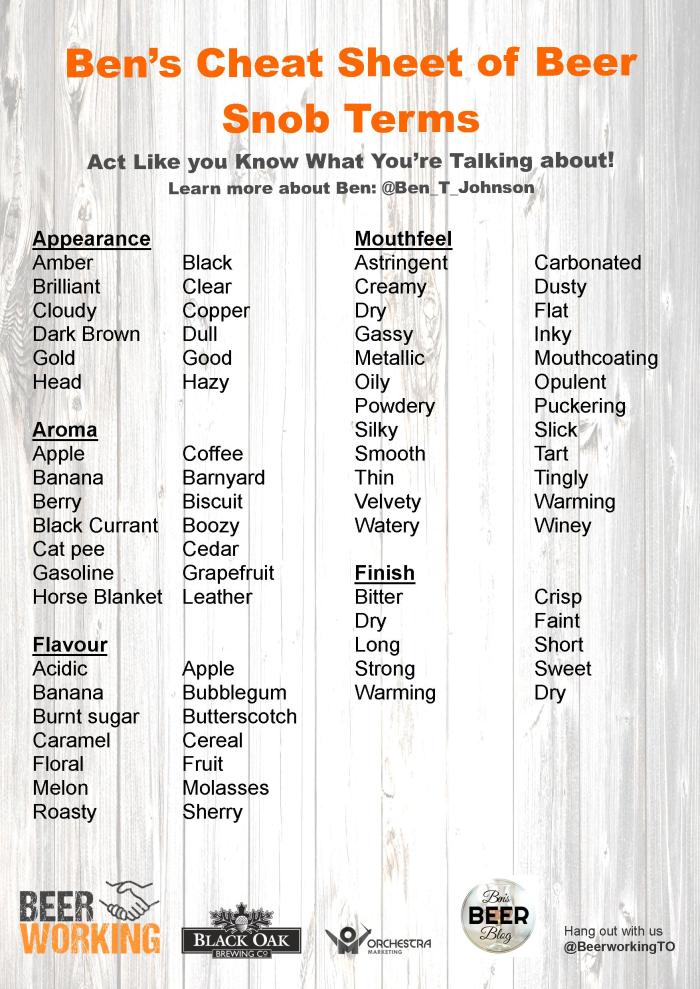 I thought I might offer this handy reference to readers of Ben’s Beer Blog so that you too might sound like you know what you’re talking about the next time you enjoy a beer. This handy jpeg comprises literally everything* you would learn if you spent hundreds of dollars on Prud’homme or Cicerone certification. You’re welcome.

Obviously it’s not perfect. Some of the terms were edited for space and, hilariously, the term “Good Head” was cut into two descriptors for appearance so now both “Good” and “Head” stand alone as beer snob terms.

If, for some reason, you think that simply printing off the above guide and sticking it in your wallet isn’t sufficient for your beer appreciation needs, or you’d like to practice your newfound vocabulary, you might also consider attending one of the remaining BeerWorking events. Crystal will be back at the helm for three more  events walking folks through the finer points of tasting beers from Wellington Brewery, Mill Street, and Lake of Bays. Right now (like today!) you can get two tickets for the next event for $40. I apologize in advance that Crystal likely won’t provide you with a cheat sheet, but feel free to take mine with you.