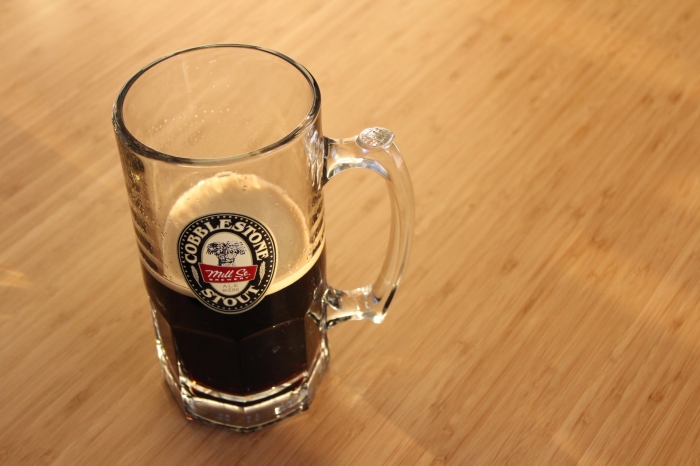 Guinness is a pretty great beer.

It’s got a long storied history dating back to roughly 1770, is arguably one of the most famous beer brands in the entire world, and will forever be the stout against which all other stouts are measured.

It also tastes good. I enjoy an occasional Guinness and you’ll likely find that, if you’re with a fan of good beer but trapped in some shitty bar where the tap lines are all purchased by breweries, that beer fan will likely just order a Guinness because, among the other ubiquitous big names, it’s generally the one consistently reliable and decent beer that’s available virtually everywhere and, provided the beer is fresh and the lines are clean, is an interesting, comforting, rich, and creamy stout.

But come every god damn March, I come to hate Guinness. I detest the idea that we’re supposed to drink more of the black stuff–which already sells in excess of 850 million litres a year–in order to commemorate the death of Ireland’s patron saint. There is so much Guinness marketing crammed down our throats in the lead-up to March 17th every year that it’s enough to make you rage vomit bile so thick and creamy as to rival the famous dry stout itself.

So this St. Patrick’s day, I say fuck Guinness.

The notion that we have to drink a certain thing on a certain day just because a huge marketing campaign tells us we have to is bullshit, man *flips collar on leather jacket, lights cigarette*

If you must go out and drink or otherwise celebrate the arrival of Christianity in Ireland or mark the occasion of the lifting of Lenten restrictions you almost certainly don’t actually follow, why not drink something else?

First, let it be said that there is really no reason you need to drink Stout on March 17th. Porter and its friend stout are most certainly English or Irish styles with a long intertwined history, but aside from the fact that the Irish really, really like stouts, there doesn’t seem to be an actual connection between stout and St. Patrick’s Day (storied beer writer Michael Jackson has some interesting thoughts on the topic, here, incidentally).

That said, let’s admit that the marketing of Guinness and our association of stout with Ireland is so pervasive that it does kind of sort of feel like we ought to drink something thick and black on March 17th and so, if you must drink stout, there is a plethora of fine ones available right in your own backyard that might be even better than (and certainly fresher) than the stuff that’s shipped over in kegs from Dublin.

Handily, just as I was pondering the concept of this post, the Ontario Craft Brewers sent a press release that includes all the stouts made by their member breweries and so the first 28 entries are all…

Stouts Made by Members of The OCB:

While the number of distilleries currently in production is considerably smaller than neighbouring Scotland, the Irish claim the first recorded instance of whiskey in 1405, some time before the Scots in 1494. And while production is small, they do make some truly decent whiskey, and demand for it is on the rise. According to good ol’ wikipedia, Irish whiskey has been the fastest growing spirit in the world every year since 1990. Here are 17 different Irish Whiskeys currently available at the LCBO. I’d wager that picking up a bottle of virtually any of these would make for a more memorable St. Patrick’s day than tossing back Guinness down at Patty O’Shea Sullivan Blooms again this year.

Clearly you have to get wasted and drink alcohol on St. Patrick’s day because…wait…why? OK, yes there is a tradition of breaking lent on March 17th that’s been used to justify our collective public intoxication as a tribute to the Irish, but seriously, who says the main focus of March 17th has to be getting shitfaced? Irish people also drink a lot of tea, as it happens. So why not stay home with a James Joyce book, steep some tea and give your liver the night off?

are the market leaders and your preference between the two in Ireland is often s a point of pride. Mrs. Bridges British Bakery on Eglinton Ave East at Victoria Park in Toronto stocks a wide range of Barry’s teas and Flowers and More on Jane Street stocks Lyons for purchase in store or online.

Bulmers original Irish Cider Made in Clonmel, Co. Tipperary has been in production since 1935. In the last seven decades it’s grown to become popular not just in Ireland but all over the world (commonly labelled as “Magners” in places other than Ireland thanks to some sort of legal dispute).

And because local cider is in fact, widely enjoyed across Ireland, why don’t you use St. Patrick’s day as an occasion to try some cider made right here in your backyard? In my personal opinion, they’re almost all better than Magners. Here’s a list of the local cider makers represented by the Ontario Craft Cider Association (most of them make more than one cider so you’ve got lots and lots of options here, too).

Newsflash. There are other Irish beers available to you (to say nothing of the beers from Ireland’s growing craft beer scene that likely aren’t available to you). You might conceivably find and try any of these on March 17th.

Much like the rest of the world, the Irish actually drink quite a bit of easy to drink watery shit(e). You could justifiably say you’re indulging as the Irish do if you opt to down any number of ice cold flavourless lagers on March 17th, but here are some that rank among the best sellers on the Emerald Isle.

There’s definitely something to be said for having the right drink for the right occasion, but, in my opinion, the appropriate drink usually isn’t the one we’ve been forced to believe is the appropriate drink because of a massive marketing camping designed to sell a specific product. If you like Guinness, by all means drink Guinness. But you can drink it on March 18th, 18th, 20th, and any other day of the year too. And if you want to drink something else, drink something else! Sláinte.

4 thoughts on “80 alternatives to Guinness to drink this St. Patrick’s Day”