Me: This is kind of a rough neighbourhood, man. I’m pretty sure that’s a gang over there.
Jeff: That one guy has a tuba!
Me: Oh, well then we should probably go wherever they’re going.

In retrospect, following the gang of Mexicans simply because they had musical instruments was clearly a mistake.

Our first tip should have been the bouncer at the bar that they led us to who, when patting down me and my 6’7″ drinking companion, Jeff, seemed far too surprised when told we didn’t have any weapons on us. “Not even a knife?” he had said.

Inside we were quickly abandoned by the band who would shortly undertake one of the most terrible live performances I’ve ever seen and we were greeted by a sea of brown faces looking up at Jeff.

For a Monday night, the place was packed, but it soon became clear, as we sipped Pacificos, that we didn’t fit in—my attempt to blend in by asking for “Dos cervezas” notwithstanding. It wasn’t long before braver elements in the crowd started bumping Jeff intentionally; testing him like hyenas might nip a lion in their midst to provoke some real violence. Fuck this, we decided, and headed for some place called Clooneys, which google maps told us was just a quick, no-eye-contact walk from us.

We had spent most of the day in transit from Toronto to San Francisco then, once we landed, had gone immediately from the San Francisco airport to Santa Rosa, California, the home of Russian River Brewing Co. and their famed beer, Pliny the Elder. Here too, we had found crowds, but much friendlier. 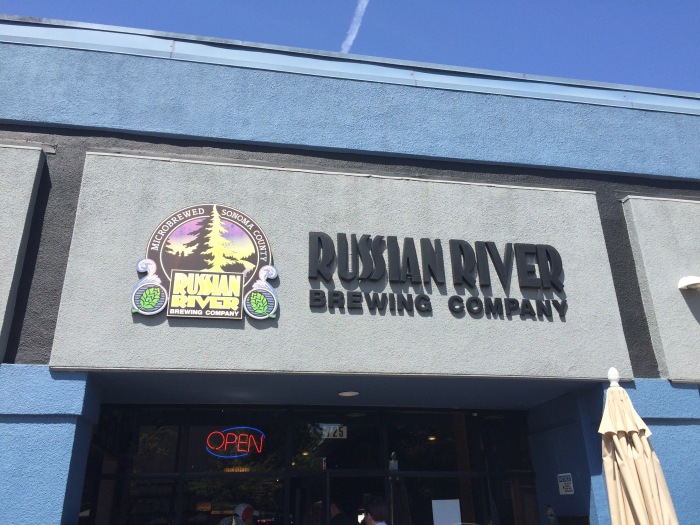 For those who have never been, Russian River’s brew pub isn’t really all that much too look at. It’s simply a bar, with the myriad beer detritus that lines the walls of all bars, but here, on closer inspection, the signs, t-shirts, and placards that adorn the walls are mostly related to the accolades bestowed on the beer that is made onsite, in a 20 barrel brewery tucked behind the bar, by way of a retail shop (they also have a production brewery about a mile away that is 50 barrels). It’s the kind of place that real beer fans will love, not only because the beer is phenomenal and well-priced, but because the accoutrements and bullshit trappings of most bars aren’t really present: no gimmicks, no scantily clad waitresses, no Golden Tee or Buck Hunter. It’s a no-nonsense bar that might pass as your local if you were lucky enough to live in the area; they just happen to make world class beer right through those doors over there. A large chalkboard menu lists the draught offerings, organized in ascending order by ABV, a TV plays the San Francisco Giants home opener against the Colorado Rockies, and the food is well-made rib-sticking fare—sandwiches, pizzas, etc.

The temptation to go for the sample platter of beers—a ridiculous selection of 20 beers (!) divided evenly down the middle by American-style on one side and Belgian-inspired on the other—is heavy. Especially since the selection, which includes Supplication, a sour brown ale aged in pinot noir barrels with sour cherries, Sanctification, a 100% brett fermented golden ale, and a handful of other inarguably great beers, is just $16. But after a five hour plane ride and a harrowing two hour drive in a van where the soundtrack was mostly our driver’s favourite 1980s ballads, our nerves are frayed and almost all of us opt to get right to the heart of the thing with a glass of what we’ve all been visualizing for the better part of a day: Pliny. 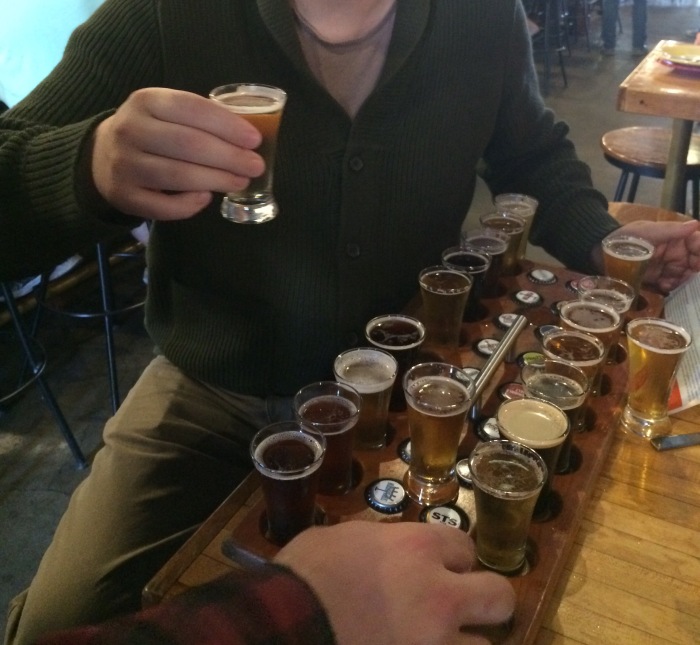 At 8% on an empty, road-weary stomach, Pliny the Elder makes for a hearty choice for breakfast, but it proves to be the right decision. The aroma is all citrusy pine and the flavour delivers excellent grapefruit and citrus with barely-there caramel malt to keep it well balanced. The finish isn’t bitter at first but it’s long and dry and builds mild bitterness as you drink your beer. On our visit, my pint is served perhaps a little too cold then I imagine most beer nerds would prefer, but given that we’re soon inhaling some dish that seems composed simply of bread, jalapeños and cheese, it’s just short of fucking perfection. Is Pliny perhaps a little overly-fetishized? Probably, but this is an excellent beer and the owners reluctance to increase their production and distribution of it in spite of the high demand for it mean it remains a highly coveted beer. And let’s be honest, the mythology of craft beer is really all part of the fun: the difficulty obtaining certain beers, the pedestal on which some beers are placed and our collective response to that designation, the searching for and lining up for brands like Russian River’s Pliny the Younger—that’s all part of the fun, isn’t it? Hell, some assholes even maintain entire blogs based around these absurd premises.

Certainly the storied brewpub-as-destination mythology worked on me and my travelling companions—who are themselves the makers of beer at a very good brewpub: We all load up on beers to take home to be envied by our beer-coveting friends (not to mention a few shirts and hats) before we load back into the van for two more hours of intermittent radio signal and Phil Collins.

But it is perhaps a family uniquely Ontarian mentality that has led us to our specific stripe of brand lust. The excellence of Pliny notwithstanding, it seems to me that perhaps we simply want what we can’t have–which when it comes to beer in Ontario is typically a lot. The folks sipping beers at Russian River were probably about 70 per cent beer tourists who had made some sort of pilgrimage and 30 per cent locals and, for the locals, I don’t imagine this brew pub that knocked the socks of this Ontarian is all that big a deal. It’s just the place they go for beer and it happens to be great.

And that’s the vibe generally in places where good beer is ubiquitous: the concept of having good, local beer on tap is normalized. People in San Francisco don’t need to go to one of the two or three good beer bars in their city, because good beer is all over the place. Hopefully, with changes coming in the Ontario budget, people will begin to “normalize” the concept of well made beer here too and some time soon we might walk into a terrible dive bar and see a few really good beers on tap alongside the usual Molson and Labbatt suspects, much like it was in San Francisco when Jeff and I ended up at Clooney’s, which ended up being a hole in the wall that would make holes in the wall upset at the association. It was an experience perhaps worthy of its own blog post, but it was a true dump where dubstep blared inexplicably, the bartender was roughly 12 and clearly wasted, but didn’t bat an eye when we asked for something local from the draught lineup. And no one tried to stab us. Success!

2 thoughts on “Beer and Loathing: Pliny, dubstep, and hostile Mexicans”