Sure, there was a time in my life, as there is in most budding beer nerds’ lives, when I wholly embraced all that Untappd had to offer. A crowdsourced collection of tasting notes at my finger tips, a way to track beers that I tried, and even a built in humble-brag system that lets me not only tell people what cool beer I was drinking in a cool bar but also alert all my social media followers that I’ve just earned a badge for surpassing a benchmark like 25 IPAs consumed in one month. It was fun. It was engaging. It was well designed.

But now I think it might be one of the worst things to happen to beer drinking since Adolphus Busch decided he wanted to shag Lilly Anheuser.

Here’s how I came to this conclusion. First, on crowdsourcing tasting notes: I’ve realized I don’t actually care what most people think about a given beer. On the one hand, Untappd is great in that it democratically allows everyone to provide feedback about a beer, and yeah! power to the people.  But on the other hand, who cares about people? Untappd makes every neckbeard with a smartphone think he or she is Michael fucking Jackson. Do I really give a shit that “Jeff T.” thinks Bellwoods Brewery’s Farmhouse Classic “has a weird tangyness” or that “Kyle M.” thinks Instigator IPA from Indie Alehouse is “Really good”? No. No I do not. Untappd is the Yelp of beer, but lazier. If I’m looking for a good restaurant, I don’t want to know that John from Schenectedy gave it one star because he was seated under a drafty vent, I want to know what an actual fucking restaurant critic has to say.

Beer is the same way, and I’m sorry for being snobby here, but most people don’t know a cream ale from a California common, so why the fuck would we want an app that lets all of the people drinking beer (all of them!) share their opinions directly with the world?

Perhaps not surprisingly, however, those who actually work in the beer industry have mixed opinions about the usefulness of Untappd and those amateur reviews.

“I’m a masochist, so I routinely look at this site,” says Sam Corbeil, brewmaster at Gravenhurst, Ontario’s Sawdust City Brewery. “Every morning I pick up my phone and update it to see how much people hate my beer. It’s an awesome way to start your day.”

Corbeil admits that while he’s somewhat of a glutton for punishment, the app does serve a purpose. “I value the site as a metric to see which beers people are drinking and where they are drinking it. The statistics page is much more important to me than any one particular opinion on any given beer. It kinda gives a quick snapshot of how things went the night before. I personally don’t use it to check-in or rate any beer, it’s strictly another tool we use to monitor how much–or how little–people are drinking Sawdust.”

Andrew Murphy, a partner at Unfiltered Brewing in Halifax, Nova Scotia, has a less nuanced view of the site’s usefulness.

“We hate Untappd,” he says. “Idiots rating beers poorly because they don’t like the style or because they’ve got a grudge against a brewery (seems to happen regularly with us!); or rating a fave place blindly.” Like me, Murphy takes issue with the fact that anyone can weigh in on his beers. “My problem is that the reviews aren’t moderated or weighted,” he says. “If someone rates one of our beers substantially outside its average, a mod should be looking to see whether it’s a revenge review (‘he was really rude about another brewery I like! What an asshole!’) or an utterly uninformed/irrelevant one (‘I don’t like hoppy beers! Mmmmm, malt.’).” 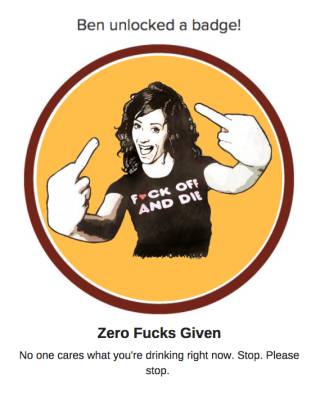 For the most part though, my informal survey of brewers seems to indicate that most see it as something that adds value to their business. Patrick Schnarr, Brewer and Co-Owner of Outcast Brewing in Calgary, Alberta, seems to have faith in the Darwinian nature of open source reviews and tells me that, “after a certain point, the thoughts of the crowd come together” and that perhaps “some people who don’t like it don’t like it because they do poorly on it.”

“It helps me find ways to fine-tune my recipes based on feedback,” he says. “If I see something repeatedly mentioned, it makes it easy to tweak to improve something for next time. Also on a business level, the fact that my brewery is ranked #4 in Canada is a huge selling tool for me as a brewery owner when sending cold emails or dropping in to new accounts.”

Troy Burtch, who is the Communications Manager for Great Lakes Brewery in Etobicoke, Ontario, likely spends more time considering the places where beer and the internet collide than even the loneliest basement-dwelling beer blogger. Burtch, as he tells me via email, is clearly on board with the value of Untappd from a brewery marketing perspective and has embraced all the app has to offer GLB as a business.

“Great Lakes uses Untappd Business which allows us to update our retail store fridge listings in real time, pushing notifications out to those that subscribe to our brewery so they can be made aware of any new offerings. We also enjoy the analytics of Untappd. We can see when people are here at the brewery, what social media platforms they are sharing the beer on that they are drinking, how many GLB check-ins individual drinkers are making and where they are making them, tracking popular offering, etc. I also really enjoy the interaction we can have with our supporters,” he says. “For example, if I’m upstairs working and I see someone has checked into GLB on the app, I’ll head down to the retail store and say hi, have a drink with them, get to know them and find out why they enjoy the beers they do.”

And OK, sure, masochistic brewmasters, sales-focused owners, and zealous marketers might see the value in Untappd check-ins from a business perspective, but I’ve recently realized that it is in fact those very public check-ins that are one of the things about Untappd I hate the most–and not just because checking in at Great Lakes might mean you have to have a beer with Troy. Most people you ask about Untappd will tell you that it’s simply a great way to keep track of beers they’ve tried. It’s a sort of easy reference when you’re at a bar or at an event to check if it’s actually a beer you’ve already had before and whether or not you like it. And, OK, Untappd IS handy for that. But tell me why you need to push all those check-ins to twitter? I don’t give a shit that you’re drinking Big Rock Grasshopper Wheat at the Calgary Stampede. Do you really think the world needs an instant review of your beer? If you actually give enough of a shit to record the beer and your thoughts on it, keep it to yourself.

To me, those check-ins in fact embody one of the worst impulses of the beer fan in the social media age, by providing another means for people to boast about whatever it is they’re drinking. As a beer writer with a pretty active social media presence, I know I’m not not one to throw stones, but I really hate how Untappd allows users to push notifications to twitter and Facebook. It’s like the laziest humble brag possible. You don’t even have to take a picture or provide any context. You click that you’ve had a beer, you enter your uninformed opinion on it, and then you fart it out to all the people who follow you on social media. It’s boring. It’s lame. And it’s clogging up my twitter feed with shit I might care even less about than how far some schmuck just jogged.

The worst part about Untappd to me, however, is what I recently referred to in my last column for the magazine MASH (subscribe now!) as the “game-ification” of beer. In that column, in which I sought to extoll the virtues of a full pour over a sample size, I briefly spoke to the fact that Untappd is a sort of symptom of the “quest” approach some seem to take to beer drinking. Perhaps an extension of our generation’s humble-bragging social media tendencies, a lot of people these days seem to be pursuing certain beers simply for the sake of checking those beers off a list. And it drives me fucking crazy. It’s the reason you can literally buy tiny sample bottles of ultra rare beers online these days, it’s the reason so many people I see on instagram appear to spend most of their income on rare beers, and, I suspect, it’s the reason so many people will line up for expensive beer when they have a cellar and fridge full of the stuff at home: It’s simply to say that you’ve had it.

At best, this is an annoying approach to beer that has more in common with collecting stamps than it does “drinking,” and at worst, it seems to me to trivialize or normalize a sort of casual alcoholism (the prevalence of which in the beer industry might be fodder for another 20000 words some time…). I mean, Untappd users are literally awarded for their drinking efforts with little badges. The more you drink, the more you win, and of course, you’re encouraged to then push those little badges to social media to once again reinforce the idea of how cool it is that you’ve had 678 lagers this month. And not to get too Modern Psychology with the whole thing, but those little badges that pop up on your phone and the “likes” you get when you push them online have actually been proven to give you a little dopamine hit, meaning your brain has a little reward system that continues to encourage you to clog up my twitter feed with the rewards for your binge drinking.

Frankly, Untappd has me so irritated that it makes me want to drink.

And when I do, if I have a great beer I want to remember, I’ll probably make note of it like I usually do, in my notebook, and I won’t even show it to you.

37 thoughts on “Let’s talk about Untappd”