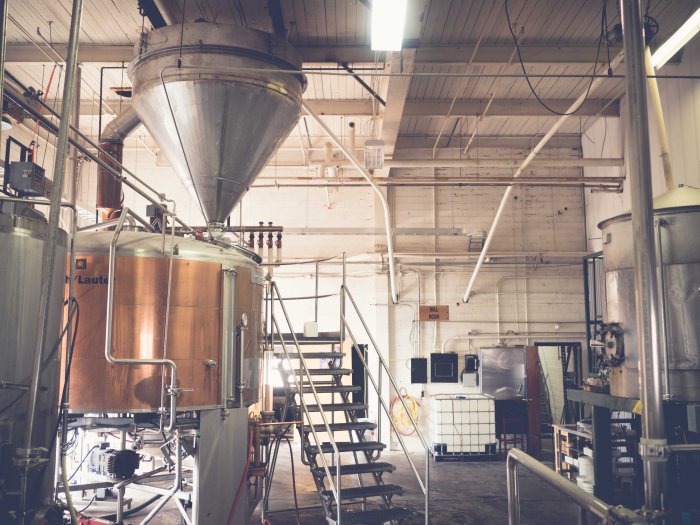 At this point, Great Lakes Brewery has largely cemented their status as a great Canadian brewery and has earned their place in most Canadian beer fans’ hearts.

I’d wager that, right now, almost everyone reading these words has at least one GLB beer in their fridge. And why not? They make great fucking beer.

But it wasn’t always like that. In fact, the killer version of Great Lakes that most of us know and love is a fairly recent innovation considering that the company has actually been around for 30 years. Purchased by Peter Bulut Sr. in 1991, Great Lakes was, at the time, a small brewery in Brampton with an 18 hectolitre system that made their beer using syrupy malt extract brewed on an electric kettle. And so, roughly the same time they bought the business, they bought a mill and a masher to make beer from proper malt, and immediately outgrew the brewery’s fermenters. Taking possession of the company in April, Bulut had to move his operation to a 30,000 square foot building in Etobicoke by August, and today that’s the building the brewery still inhabits.

Bulut quickly found success in the 1990s Toronto restaurant scene which was, at that time, largely dominated by Greek families. Having come from a Greek and Serbian background and having been raised in an Italian school, Bulut was a man of languages and would often adapt the dialect of whomever he was speaking with and tell restaurateurs he was actually from the same village as them. It proved to be an effective ruse and, as a result, he ended up selling a lot of beer.

Like, a lot. Next time you drink a Karma Citra, be thankful for the hardworking Greek people of Toronto and their patrons who drank a shit ton of Great Lakes Lager in the 1990s to make that IPA possible for you.

Then, around 1997, Bulut’s son, Peter Bulut Jr. began to get more involved in the production side of the business. As he tells it, he “fired everyone and bought better equipment.”

This is also around the time that Great Lakes started trying their hand at some more adventurous beer. I asked Bulut what he thinks started the revolution and, in fairly typical fashion, he doesn’t romance it.

“I think it was just boredom,” he says. “We were draught only, we hooked up with an agency, we invested in fancy packaging, but we really just weren’t moving beer.”

I asked him if he sensed that maybe the market was getting bored with drinking lager right around the same time he was getting bored selling it and he laughs at me. “Oh yeah! I recognized it, and we were at the forefront of innovation,” he jokes. “No, it all just kind of happened.”

They brewed a decent black lager in 2004, but, Bulut says, the market wasn’t ready for it. That beer won a World Beer Award and was a favourite of brewery staff, but it wasn’t really until 2006, when they brewed their first ale, Devil’s Pale Ale, that it seemed like consumers really started to take notice, and then a series of events seems to have sent them on the more experimental path they’re on today.

They brewed 1200 bottles of a specialty winter beer for their holiday party and gave away 600 bottles, but it was so popular, they decided to sell the remaining 600 and thus GLB’s Winter Ale was born. They started an unlikely relationship with a farmer who was losing his shirt in the tobacco business in 2007 and he had a weird idea that he could start using his drying conveyor belt to dry out fruits and vegetables. Bulut had the weird idea that he might just want to put that dried shit in his beer, and Great Lakes Pumpkin Ale and Orange Peel Ale were born.

“That’s how a lot of these beers were born,” Bulut says. “We messed around with sorghum, sweet potato, orange peels. And that’s what began the seasonal program.”

Of course, you can’t talk about Great Lakes evolution into more experimental offerings without talking about Mike Lackey.

Now Great Lakes’ “Recipe Development Brewer” and something of a legend among hop-loving Canadian drinkers, Mike Lackey has been friends with Peter Bulut Jr. since kindergarten and, legend has it, started working at Great Lakes as a summer job working for beer.

“Lackey and I were the grunts,” Bulut says. “We carried grain, we’d go to Canada Malting on Bathurst and load hundred pound bags into the van, unload them—we were just grunts.”

And in fact, Mike Lackey’s early forays into brewing were fairly disastrous. Once, Bulut says, they actually burned beer. “When my dad was building the new brewery at 30 Queen Elizabeth they left me and Mike to brew in Brampton,” he says. “We left the malt extract in that electric kettle too long and somehow we burned it.” 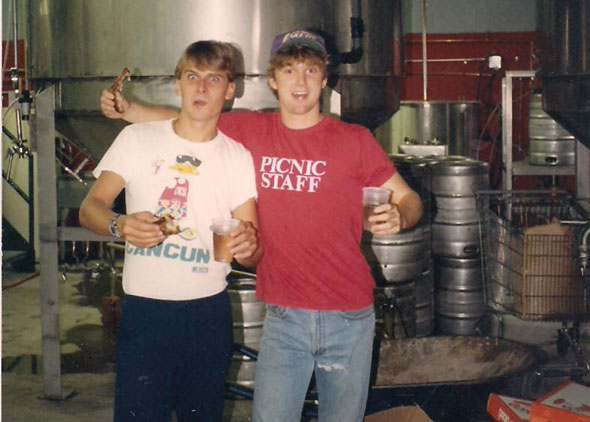 After that, the man who once swept the IPA categories at the Canadian Brewing Awards and arguably led the company to win the distinction of Best Brewery in Canada two consecutive years did everything for the brewery from keg deliveries to line cleaning before he eventually landed on what most would say is his calling.

“We had a brew your own shop behind us where we used to experiment,” Bulut says. “We’d just bring wort in there, but then they shut the place down and that’s why we had to buy our first pilot system.”

“The timing isn’t clear to me now, but at some point I remember Mike got interested in doing some pilot brews and he just said, ‘You know what? I don’t want to do line cleaning I want to brew.’ And I was just like, ‘Dude, go for it.’”

Lackey started an aggressive self training program, knocking out at least a beer a month and that’s where Great Lakes Brewery’s now defunct “Project X” series of experimental one-offs  came from.

“That first year,” Bulut says, “Lackey probably put 300 or 400 brews down on that system. And at the same time, we’re starting to take trips to the US and were starting to learn to like some really crafty beers so we’d say ‘We could do stuff like this,’ so he’d brew it, we’d round-table it and be like ‘too bitter’ or ‘try later addition hops’ and he’d tweak it and he just became a natural at it.”

And so that, apparently, is how Mike Lackey, using a very Malcolm Gladwell-esque approach, became one of Ontario’s best brewers.

Bulut also says that Lackey’s emerging talents and their shared appreciation for good beer are what brought about the beer that’s probably the closest thing the collective Ontario craft beer community has to a go-to beer. Or, as Bulut puts it: “We knew we didn’t want English style ale, doo-da-doo-da-doo here comes Canuck.”

First made on the pilot system for a limited run, then bottled for the 2010 Olympics, Canuck is the beer that launched Lackey, Bulut, and GLB into full blown IPA worship. The rest, as they say, is history.

When I chatted with Bulut, I asked him what, after 30 years, he finds surprising about this industry.

“As much beer as we sell,” he say, “and Beau’s and Amsterdam, I’m still surprised there’s not more consumers behind us. Like it seems like there’s a lot, because we’re so in it, but when you look at market share, we’re still at like 6% and I’m really surprised we’re not at like 20%.

“And I don’t see anybody poised to get really big. There’s like a barrier,” he says. “Of all the little guys, Beau’s is probably the biggest, Beau’s or Steam Whistle—and the next one up is so far away. So much bigger, and their flagship is a discount beer. Then after Brick it’s so much bigger to get to Sleeman. What is that gap? We just kind of get stopped.”

Talking with Bulut, he doesn’t seem super motivated to change the system he works on, only sort of bemused or slightly irritated about what he sees as barriers. He’s also clearly not interested in building a beer empire.

“I’d love to see the industry way bigger,” he says, “but I don’t know that I want to be bigger, personally, you know? We’re in a great spot. 99.9% of our beer is sold in Ontario. We’re totally focused on fresh. I hear people have beer that’s four weeks old I go, ‘Man, I wish it was three.’ We’re striving to get that date code down and put the right amount of beer volume in the right store for the right movement, not to run out and not to go stale.”

I tell Bulut that Great Lakes is the reason I check date codes. Even here in London, I can find Great Lakes that’s usually less than a month old, and it usually is among the freshest options available. I told Bulut I was drinking a four week old Karma Citra when we chatted on the phone.

“Awesome!” he says. “When you get too big, you get big bottling machines that spit out hundreds of bottles a minute then you have to do bigger packaging runs, then you have more inventory, and more shit just sits on the shelf. Like, how much is a enough?

“I’d like to be like Joe the Barber,” he says, “some guy who has four chairs, cuts hair five days a week, has a nice lunch and goes to Florida every year. You know what I mean? You live good, you got enough.

So when I ask Bulut about what’s next for Great Lakes, he talks about a new series of beers, and he’s excited to talk about a documentary being produced to celebrate the company’s 30 year anniversary, and I ask him if he’s got an exit plan.

If Molson calls tomorrow because they’re growing their “craft” assets, I ask, does Bulut have a number on a piece of paper somewhere for which he’d walk away?

He’s quiet for maybe a second.

“No way. I have the best team in Ontario. From brewing to sales, to marketing, to admin, to production, I seriously think I’ve got great people and, if I did that, that would just be a fuck job. I wouldn’t want to be that guy. I’m not that guy.”