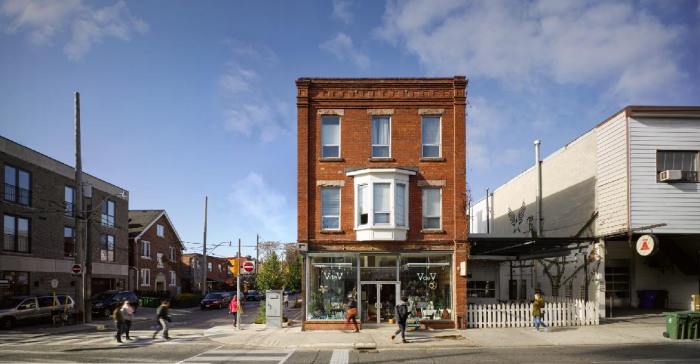 Thanks to publicly available documents and a tip from an anonymous reader of the blog who works in the area, I have discovered that Bellwoods Brewery is looking to expand their brew pub to take over the space next door to them at 120 Ossington.

Currently the home of V de V “a vintage and industrial style furniture and home accessories store,” 120 Ossington is a corner lot located directly next to Bellwoods’ existing location and features frontage on Ossington and a considerable footprint in which the brewery could expand its operations. The proposed development plans for the brew pub expansion reveal that the space could add significant seating and a larger kitchen space.

I reached out to Bellwoods for comment on the plans I discovered and the only on the record comment they were willing to make was as follows:

We, with the co-operation of the Landlord, have undertaken a preliminary analysis to determine if a future expansion of the Ossington brewery into a neighbouring property is a long term possibility. There is no timeline and the feasibility study is for business planning purposes only. The neighbouring building is fully leased. We appreciate the tremendous support we have received since opening on Ossington in 2012 and we remain committed to the community. As always for official updates on Bellwoods Brewery please visit our blog at http://www.bellwoodsbrewery.com/blog/

Bellwoods is usually farily tight-lipped about their business plans and, in my experience, increasingly wary of media-types sniffing around owing to a couple of public fiascos (hi, Brewery District!) and error-ridden stories about them that have run previously in blogs in TO (ahem), so while their caution to talk on the record isn’t surprising, I feel it’s probably prudent to offer this fairly large caveat about their plans: I can’t say I have officially confirmed anything other than the fact that the plans below exist.

That said, the plans look pretty dope. If the plans below do come to fruition, it appears the actual bar at Bellwoods’ brewpub will be moved into their proposed new space, allowing the existing space to expand to a maximum potential capacity of 75 people, while the floor plan for the new dining area shows a 105 sq/m front of house that will seat a maximum of 150 people. While there really isn’t much to complain about during a trip to Bellwoods’ brewpub, the lack of seating and a seemingly-constant line at the door has often meant fairly irritating wait times for a table, and almost no one who works there cares if you have a stupid blog. This expansion thus seems likely to go a long way to alleviating the frustrations of thirsty and impatient patrons. And bloggers with delusions of grandeur.

The plans call for doors to be added to both the front and back of house to connect the two addresses and shuttered windows above the bar will connect the new space to the existing brewpub as well as the existing patio, presumably providing access for service. 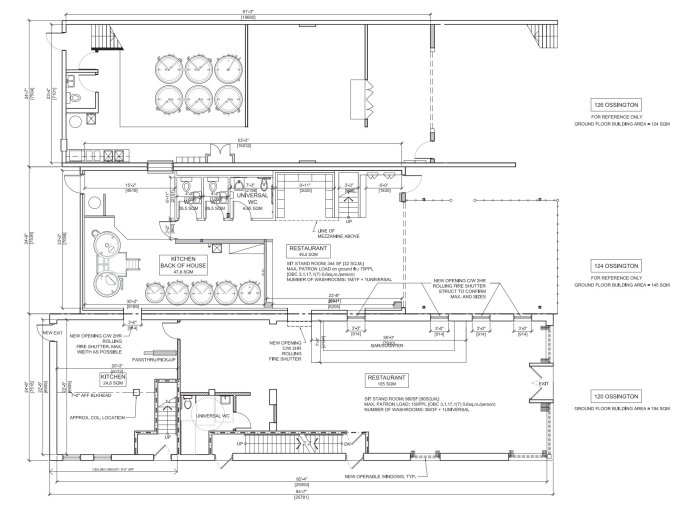 I’m personally excited to see that the plans call for a roughly 25 sq/m kitchen and, if the development comes to fruition, hope it will give Bellwoods added resources that allow their menu to shine. In my opinion, even from the early days when Guy Rawlings inhabited a tiny “kitchen” under Bellwoods mezzanine, the food has been consistently interesting and thoughtful (a skewer of duck hearts with my Wizard Wolf? Why the hell not?). And while the dining has often taken a back seat to the excellent beer, the addition of a potential 150 person capacity dining space in a building that won’t be encumbered by bulky brewing equipment suggests to me that there might be renewed focus on Bellwoods Brewery as a dinner destination. And if the owners put as much care into designing a menu as they have taken brewing their beer and building their brand, this could mean a very nice addition to Toronto’s dining (and drinking) scene.

When this expansion might actually happen, I obviously can’t say, but given the brewery’s track record, I’ll certainly line up to check it out when the doors open. Or, better yet, not have to.