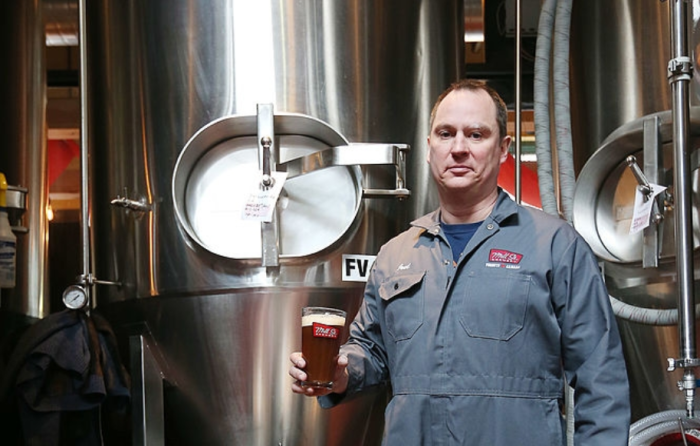 It would be difficult to overstate Joel Manning’s impact on craft beer in Ontario and, indeed, Canada. Manning was the Brewmaster for Toronto’s Mill Street Brewery from 2005 to 2018 and he passed away yesterday after suffering a heart attack.

My own memories of Manning are tied to the Brewmaster’s Dinners he hosted; specifically, those he hosted for Robbie Burns Day.

For a few years in a row, I attended Mill Street’s annual Robbie Burns’ Supper, which Manning always hosted. In 2013 I was lucky enough to actually get seated next to Manning. He hosted the evening as he had in previous years, with a sort of determined reluctance. It is difficult to describe exactly, but in my interactions with him he always seemed infinitely more comfortable brewing beer or talking about brewing beer than he did hosting these sorts of events, yet it was also always abundantly clear to me that he was fully committed to the importance of hosting these things properly.

At that dinner in 2013, I recall Manning mistakenly gave the notes for the beers on hand out of order. While we nosed his caramel-flavoured, mahogany-hued Scotch Ale, he gave us tasting notes for a sweeter, lighter, “Tartan Ale” that was next up in the order. No one in the room aside from me noticed that his notes didn’t actually match what we were tasting. When he returned to his seat beside me, I let him know. He was irritated at himself, but he liked that I told him. I then suggested that people didn’t really seem to be listening and I suggested he next take the mic with a bottle of absinthe in hand and offer tasting notes for Mill Street Organic to see if anyone noticed. He did not like that.

To a person, anyone I’ve heard speak of Manning is likely to note that “he is a good dude.” He was affable, open, steadfastly committed to helping people in his industry, and always willing to talk. He was also, in every sense of the word, a professional brewer. Manning began brewing beer at age 20 when he was hired as a brewing assistant at the original Amsterdam Brewpub in 1986. He worked his way up to Brewmaster there in just three years and held that position until 2004. In 2005 he took over as the Brewmaster at Mill Street Brewery and remained in that role until his retirement last year. He worked in the beer industry for 32 years.

Manning was a member of the American Society of Brewing Chemists, the Institute of Brewing & Distilling in the UK, and he served as Vice President, Technical Committee Chair, Chair of the Education Committee, and President of the Master Brewers Association of Canada. He was also once the president of the Ontario Craft Brewers. The last news I heard of Manning was a few months ago, when I heard he had opted to take up home brewing for the very first time.

It would not be an exaggeration to suggest that Joel Manning is personally responsible for introducing many Canadians to craft beer. The beers he made early in his career won myriad awards and Mill Street changed the industry landscape. He most certainly created the recipe for many beers that served as people’s first introduction to beer that could be interesting and flavourful. As the frequent host of tours and tastings at Mill Street’s Brew Pub and as a teacher and consultant, he quite literally put many people’s first pint of craft beer into their hands.

And if you ever took one of these tours — indeed, if you ever spoke to Manning just once — you probably walked away with an understanding that this was a man who wanted to make consistent and well-made beer and that he wanted to get that beer into as many people’s hands as possible. Joel Manning was probably not what anyone would call a beer geek, but he was insanely, single-mindedly dedicated to the work of brewing beer and he was a man who quite simply respected brewing. In an interview from 2014, Manning — after 28 years in the industry — noted that there were a few styles of beer he had yet to try brewing because he didn’t feel he had enough knowledge of the style to do them credit. Without a hint of irony, he noted he hadn’t tried to make certain beers yet because he would never want to “disrespect the style.

Back at that Burns’ supper in 2013, while Manning did not opt to give further incorrect tasting notes in order to test the crowd’s attentiveness, he did take to the mic again, this time to deliver five full pages of his prepared notes. It was late in the evening. The crowd had endured four courses, four beers, the Selkirk Grace, and the Ode to a Haggis, and they were growing visibly less attentive. Manning endured, determined to give the Plowman’s Poet his proper due. When he returned to his seat, it was clear he had noted that interest was waning, but he was resolute. He leaned in and told me privately, “Someone has to explain why the fuck we’re here.”

Manning is remembered by his wife, Lisa, and their two sons. He was just 52 years old.