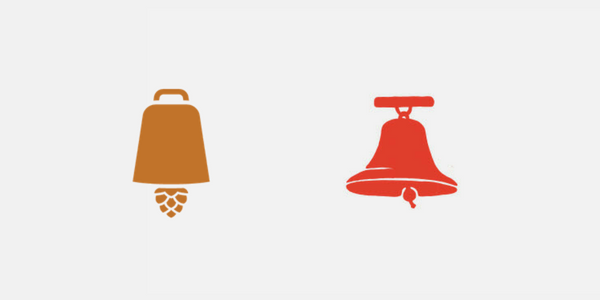 A few weeks ago, I wrote about the ambitious opening of Cowbell Brewing in Blyth. For the most part, news of the 26,000 square foot destination brewery was met with enthusiasm and the responses to the brewery’s opening were almost entirely positive.

But, it would seem, not everyone is so enthusiastic about the coming proliferation of a “beer that rings true.”

Cowbell Brewing, I have learned, has actually been in a quiet legal battle with Toronto’s Bellwoods Brewery over Cowbell’s entitlement to register a bell-themed trademark in Canada.

Through the Government of Canada’s publicly available trademarks database, I have learned that Bellwoods Brewery indeed has a registered trademark for its bell design for use in association with beer, operation of a brewery, and a handful of merchandise items. This trademark application was filed  on January 2, 2013 and officially registered on May 27, 2014.

Cowbell Brewery filed an application for their logo on November 19, 2015 and the application includes similar stipulations (though notably includes the addition of “noisemakers, golf towels, golf balls, [and] golf umbrellas,” which those dummies at Bellwoods didn’t think of branding).

A little digging reveals that Bellwoods has formally opposed issuance of a trademark registration to Cowbell for this logo. The opposition is ongoing.

Documentation obtained by Ben’s Beer Blog confirms that an examiner with the Canadian Intellectual Property Office (CIPO) initially flagged the Cowbell trademark registration above as problematic.  However, Cowbell’s lawyer seemingly convinced the examiner that the two marks wouldn’t be confusing because CIPO then issued an “approval” and notice of advertisement, i.e they posted it in the Trademarks Journal and allowed a window of time during which someone could oppose the registration. Bellwoods used the window to oppose the registration and, as far as I can tell, the file is basically frozen until that opposition is resolved. 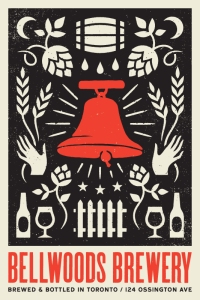 I spoke with Bellwoods Brewery co-founder Mike Clark about the issue.

“We have worked very hard to have distinctive branding since opening in 2012,” he says. “We have experienced multiple instances of consumer confusion between Bellwoods and Cowbell branding in the last year. We personally reached out to Cowbell in 2016 in the hopes of sorting out the issue but we were unable to reach an agreement.”

As for the details of their current opposition, Clark offered, “We do not agree with the content of the Cowbell appeal and we are opposing the application.”

I reached out to Cowbell for comment, too and Genny Smith, the brewery’s Communications Director, offered this statement via email: “This matter is in front of the Trademarks Opposition Board, and it would be inappropriate for us to comment on it at this time.”

And indeed, this matter is still in front of the Trademarks Opposition Board, so it’s not exactly clear to me what the outcome might be. If you’ve seen the scope of Cowbell’s branding initiative (packaged beers already in the LCBO, signs emblazoned on a 26,000 square foot brewery, a fleet of vehicles, clothing, and–presumably–golf towels coming soon), it seems clear that a decision in Bellwoods favour will represents a costly outcome for Cowbell. They could choose to alter their logo so as to clear up potential “confusion,” or (I’m assuming) they could offer a bunch of money to Bellwoods to make this go away. And, of course, there’s always the chance that the board will side with Cowbell and we’ll just have two bell-emblazoned breweries in Ontario, confusing the shit out of everyone who drinks beer. Or not.

Interestingly, this isn’t the first example of trademark issues hitting Canada’s beer scene. Moosehead, for example, has been known to get bent out of shape for any use of the word “moose” when it comes to beer, even threatening legal action against Subdury’s Stack Brewing in 2014 for having the audacity to call two of their beers “Angry Moose” and “Friendly Moose.” Stack ended up taking the path of least resistance and simply rebranded these beers Stack ’72 and Shatter Cone, respectively. Last year, Smithworks brewery in Peterborough changed the name of their entire company to Smithavens with the official line that “the Smith family team realized their beer sounded too much like another product” and nary a mention of Smithwicks parent company Diageo, who presumably brought down the hammer. Frankly, given the proliferation of breweries in Ontario and Canada generally, it’s kind of surprising there haven’t been more disputes over beer names and brewery logos. There are only so many hop puns to go around.

With the “battle of the bells” though, it seems unlikely to me that either party will back down. Bellwoods is a well-established and critically acclaimed craft brewery that is fiercely conscious of their image and branding and Cowbell is clearly ambitious, heavily invested in their new company, and very business savvy and thus seem unlikely to balk at the idea of using their estimated Scrooge-McDuck-levels-of-wealth to fight a prolonged legal brewery until Bellwoods taps out. Accordingly, this battle is probably still in the early rounds and it could be some time before a winner is announced and the…(wait for it)…final bell sounds.

Hey! Like what you’re reading? Throw me a vote in this year’s Golden Tap Awards. Choose your favourites in all things Ontario beer–and don’t forget your favourite beer writer.

7 thoughts on “For whom the bell tolls: Bellwoods Brewery v. Cowbell Brewing”