Yesterday, the Beer Store issued a press release announcing the launch of a new “pilot series” of stores with the idea of inviting Ontarians to “meet beer.”

Opinions in Ontario brewing are a lot like assholes and IPAs: These days, everyone has one.

There seems to be a lot of beer writing occurring as of late on the subject of beer writing itself—so I thought I too would jump on the masturbatory, navel-gazing bandwagon and offer my two cents and pretend that this little space I’ve carved out on the internets has any sort of influence at all.

The “conversation” largely began on the prolific and insightful “A Good Beer Blog.” Author Alan McLeod had offered up his opinion (as beer writers are wont to do) on an interesting little project being conducted by a co-operative of Ontario brewers who, in a nutshell, are attempting to brew beer adhering to ancient Belgian techniques that will, hopefully, see the beer fermented by wild indigenous yeasts the Brewers are hoping will drift into the open brewing vessels.

This is a broadly simplified explanation, and many other media outlets have done a much more detailed job, so feel free to seek them out if you want more information on the project (though be forewarned, none of them seem to answer my first question about the whole process, namely, won’t birds poop in the beer?!). END_OF_DOCUMENT_TOKEN_TO_BE_REPLACED 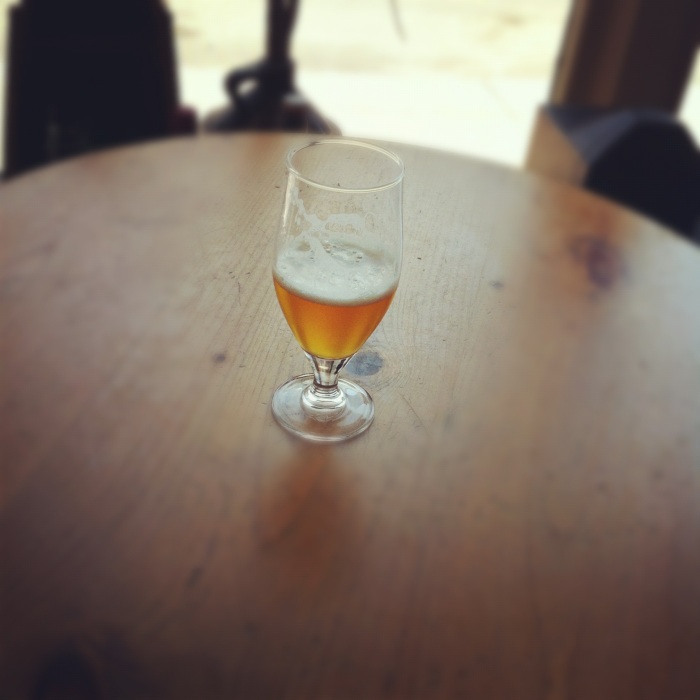 I have a problem.

I didn’t realize it was a problem until quite recently but a couple events have made it quite clear that it’s real and it’s something I need to deal with.

The first time I knew I had a problem was following a softball game. My team, comprising a number of work colleagues, opted to hit a bar in order to drown our sorrows following a 20-10 routing and, since it was the nearest bar to the diamond, we had the unfortunate experience of visiting The Dog’s Bollocks on Queen.

Now, to be clear, I don’t really mean to slag The Dog’s Bollocks–I recognize that it is a pub and that its most endearing qualities are intended to be its cheap draft, bar food, and numerous TV screens.

I’m no dummy. I wouldn’t expect gourmet from an establishment named after an animal’s nut sack. But my experience was not great–and it’s largely due to my psychological issue. END_OF_DOCUMENT_TOKEN_TO_BE_REPLACED

America is better at beer than Canada.

It feels dirty to write it and I’m half expecting the RCMP to kick in my apartment door for even uttering such a treasonous notion, but it’s true.

I don’t mean to say that Canadians don’t make great beer–because god damn it we do–I drank a shit ton of great beer just last night and most of it was brewed within 100 kilometres of Toronto. There are amazing brewers in Ontario making amazing beer and there are more new ones every day.

But we barely scratch the surface when compared to our big dumb cousins to the south.

END_OF_DOCUMENT_TOKEN_TO_BE_REPLACED

While there is, of course, no such thing as a bad time for drinking (Christenings maybe?), this month in particular seems to have aligned the stars for the city’s beer drinkers to provide ample opportunity for pint tipping.

Two notable events are happening this weekend and next at venues that will soon be ranked [Spoiler Alert] among the city’s 15 best bars for beer selection according to the readers of blogTO : barVolo and The Only Cafe.

At Volo is, of course, the 4th annual three-day tribute to hops that is the Cask IPA Challenge. The event will feature 26 brewers, all of whom have crafted a cask conditioned (unfiltered, aged and served in a cask and poured without CO2 or nitrogen) IPA and will square off tournament-style in blind tastings until there is only one brewer left standing–ostensibly on wobbly legs after three days of drinking Cask IPAs

The fun kicks off on Friday with an IPA Spinoff Challenge, showcasing some not-quite-IPA styles like Double IPAs and Black IPAs before the official tournament starts Saturday. Complete details including the list of participating brewers and the first round bracket can be found here.

END_OF_DOCUMENT_TOKEN_TO_BE_REPLACED

Not so long ago, I started writing about beer on a regular basis.

Initially my involvement with beer was a pretty casual affair, allowing me to pair two things I’ve always loved; drinking and writing.

Though after a few months writing about beer, meeting with local brewers, attending beer events, and drinking great beer, it became clear I was becoming a little obsessed with beer.

These days I spend a considerable amount of my time reading about, talking about, writing about, and of course drinking, beer and it’s my hope this obsession will soon expand into the world of making beer–but more on that later.

So while I currently cover general beer happenings for the Toronto-centric blogTO, I thought it was high time I had my own place to collect my thoughts on all things beer and document the sure-to-be-messy process of learning how to make my own.

And so, given that I have this new forum, I thought I’d use my inaugural post to pose a question to the city’s beer drinkers: Why are you still drinking shitty beer?